As mentioned in the previous post I was now forced to do a long trip or stay where I was until the wind turned westerly, possibly a long time. The potential problem was getting around or behind Copeland Island to enter Belfast Loch, there are strong tides and extensive over-falls, especially to the east of the Island. Going through  the over-falls inside Copeland Island with a strong wind, forecast at the time to be S F3-5, and actually F4-5 occasionally 6, against several knots of tide did not appeal and that would mean a detour of 8 - 10 miles. According to the navigation software I could not make it before the tide turned without starting at midnight and probably motoring.

However, I knew something the navigation software did not, the tides are at best ill-defined for a long section of the route and that just might work for me. 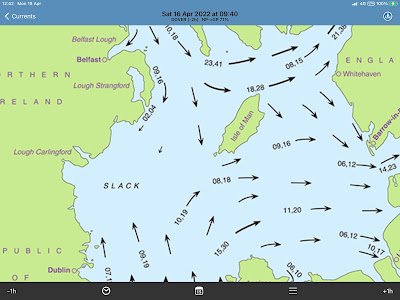 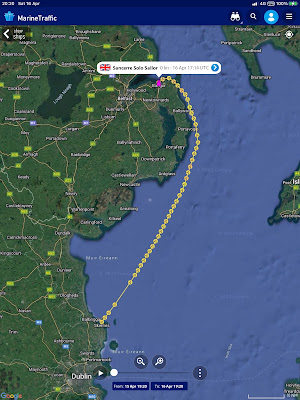 The tidal atlas, a version of which the software uses, shows an extensive area of slack water on the route, this is caused where the flood tide coming around the south of Ireland meets the flood tide coming around the north. I know from experience that it is not really slack for all the hours shown over the whole area, it varies depending on a number of factors and is to an extent chaotic. There are tidal flows, but they are not susceptible to accurately forecasting them for the atlas.

I therefore decided to leave at my now habitual 03:30 to take some of the flood northwards into the "slack area", with a strong southerly wind there was a good chance that the northerly flow would be stronger than normal and extend well into the slack area with the converse happening to the north. I should then pick up the north setting ebb on the other side and perhaps carry that to Copeland Island. It was going to be tight, but I just might make it or at least get through before the fiercest tide. If that failed I would be in for a long detour. One way or another I would go into Bangor marine for R&R and to fix my engine cooling problem.

The wind was very light but filled in slowly and by 05:20 I was sailing and making good speed with the wind mainly F5 with spells below and above. Good news!Despite my very quick passage, good boat speed and at no time having an adverse tide, it was a close run thing, as I passed Donaghadee I had 1.5 knots of tide behind me, at the first pair of buoys less than a knot and by the way point "S Copeland" (actualy SW of the island, click on the pic to see better) I had 1.5 knots against me, a complete reversal in less than half a mile. I then had to go against the tide another 1.5 miles, which was not difficult with a F6 behind me, before picking up the flow going into Belfast Loch.
70 miles over the ground in 14 hours 45 minuets (including the time taken mooring etc.).
Click here for Browns Bay and Islay.
Posted by John Lashbrook at 1:27 PM