The tide again required an early start as it would for the next 3 days, this time I was away by 03:30.

I started with just the genoa then added the cruising chute as the wind moderated and was making good progress, as the wind dropped further I changed to the spinnaker with mainsail.
I finished this leg under genoa only in F5 winds. St Margaret's Bay to Wicklow, 53 miles in 13 hours.
Wicklow harbour management does not get a good write up in the pilot and its not really suitable for yachts anyway but in reasonable conditions there is a decent anchorage just NW of the harbour close to the shore, the holding appears good and it was a comfortable night until the boat swung broadside to the small waves coming in around Wicklow Head but the roll was not excessive and in any case I had to get up and weighed at 03:40. heading for The Skerries.
I had planned to go round all of the Islands before heading west to the harbour but seeing a yacht motor out through them against the tide I did a quick check and just short of high tide there would be plenty of water to go inside one or both of the two outer Islands, the passage inside of the outer island is easier and about the same distance to the destination so I went that way sailing under the reefed headsail only 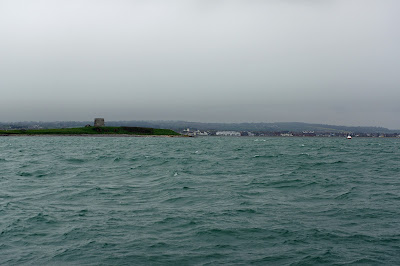 There is no dedicated area for anchoring so you have to pick a spot between moorings that, at least in early April, were widely spaced. Near springs with a fin keeled boat you can't go too far in and I was a little worried about surge as I explored but I need not have worried, it must have been the wake of a boat because I had a restful afternoon and night, although the later was cut short by the need to leave early... again.
The next planned stop was Ardglass in Northern Ireland and I tried to phone ahead to check likely availability of a berth but could not get through, then I checked the web site to find that the marina was closed to visitors until further notice due to work on the pontoon moorings.
This was bad news as it was likely to be getting quite windy from the S or SE and the next all tide harbour or safe anchorage is 70 miles north in Belfast Loch and as will be explained in the next post there is a nasty tidal gate to take into consideration, a long day was in prospect.
40 miles over the ground in seven and a half hours. 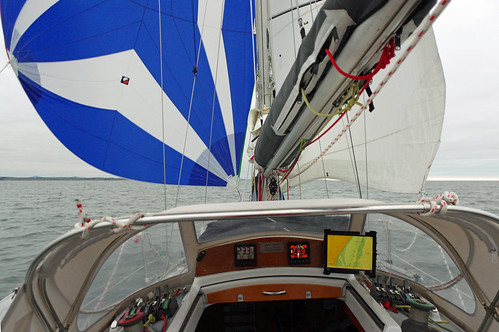