Force 6 winds had disappeared from the forecasts the previous evening and I left at 05:40 with light winds increasing to fresh as I approached Start Point, it was then mainly NNW F4/5 until I was south of Portland but varying from N to NW so I was frequently changing sail, varying from two reefs in both sails to one reef in the main and full headsail, it is a good job both systems work without too much effort!

The first challenge was a 400 metre container ship on a converging course. AIS showed a Closest Point of Approach (CPA) of about a mile, although that varied down to almost nothing as the wind was gusty changing my course and speed. It took some time to establish, by checking the ships bearing from AIS, that it was passing astern, not my favourite as I would be crossing her bow leaving me vulnerable if there was a sudden problem, so care was needed.

The wind increased but I did not want to lose speed whilst I reefed so pressed on rather overpowered but making good speed. Ducking behind was of course an option but it was a big ship and a way off. In the event I crossed her bow by over 2 miles and she passed a mile astern of me. 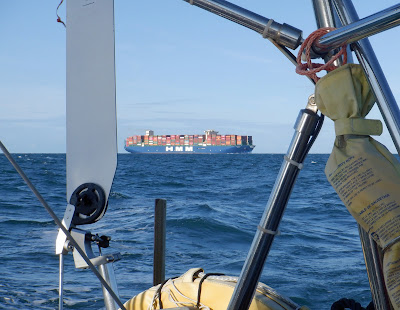 I had timed my departure well, helped by a calm sea and offshore wind making the Salcombe Bar a non-issue I had left just after low water and the tide turned favourable as I passed Prawle Point with the fresh wind I made excellent time and carried the tide to south of Portland averaging a fraction under 6 knots over the ground.
The final part of this leg was annoying, as I headed up to pass east of the Shambles Bank the wind suddenly gusted and veered from NW to NE, fast enough that the SeaFeather wind vane steering almost lost the plot only just avoiding having the boat flat aback with too much sail up. I had hoped to get further under sail but the tide was turning against me at a little over a knot but in a couple of hours would be much stronger and sailing I would not make any progress and could be going backwards towards the Portland Race so on went the engine.
The new plan was to motor to the East Shambles Buoy then I should be able to sail to Portland Harbour. That did not pan out as the wind went back to the NW, dead on the nose so I ended up motoring the rest of the way. With a strong west going tide largely helping once I was past the buoy and the rough water just north of the bank at least it was quick. 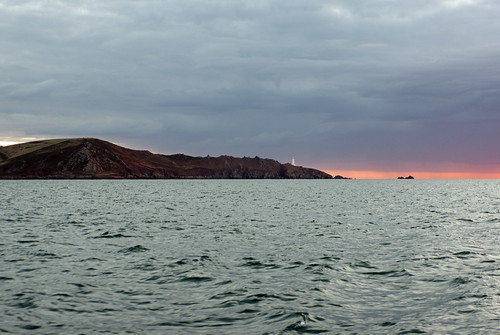 70 miles in less than 14 hours.
To Studland and Hamble.
Posted by John Lashbrook at 1:19 PM