All of the available forecasts and models showed strong winds on Saturday from the south and perhaps stronger on Monday, Newlyn would likely be uncomfortable and possibly the pontoon would be full even arriving early, so it would be necessary to raft onto a fishing boat in the commercial part of the harbour which might move out at any time and be even more uncomfortable, so I decided to head directly to the Fal. I wanted to be well upriver before the gales arrived, but St Mawes was a possibility for a night before moving upriver and might give a chance for some resupply.

So, I had an early night and set the alarm for 03:30 for an early start with good tides probably to well east of Lands End and an outside chance of a good tide past the Lizard. As often happens I woke before the alarm, in this case not long after 02:00 but the wind was favourable and likely to run out at lunch time, so I got up and weighed at 02:45.

A clear sky but a very dark night with no moon but I made it out safely and was soon sailing in a F4 from the NNE and making 4 - 5.5 knots and I was almost at the Wolf Rock before the wind died at 0730 rather earlier than forecast the previous evening. On went the engine and apart from an hour or so north of the Manacles it stayed on. 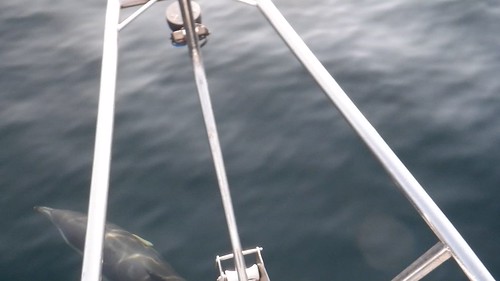 I managed to get past the Lizard before the tide turned and only had 1 - 1.5 knots adverse going up the east side of the peninsular. It was late in the afternoon when I got into the Fal and with rain threatening I decided not to divert into St Mawes for shopping and headed up river.Rain set in just after the above pictures were taken and I got rather wet - I first thought it would be a light shower and being rather busy I just put on my jacket, then the rain came down hard so I put my fisherman's trousers over the top - not a good idea in normal circumstances as the rain runs down and inside of them.
I could not make up my mind if I should anchor or go to one of the pontoons that I would have to pay for. It was low tide so I explored the swinging room at several places, my initial target above Turnaware Point had much less space than expected with additional moorings eating into the anchorage.
I went further up, there looked to be a suitable place just below "Magotty Bank" on the Truro River. The rain had stopped for a while but more threatened and I was concerned about strong southerly winds opposing a strong ebb tide creating waves or the flood and tide acting together creating problems. So to be on the safe side I went to the visitor's pontoon just down from there and above the confluence of the rivers Fal and Truro.
That was probably the best bet, the 24 metre Gaff Ketch "Maybe" dragged and went aground backwards onto Magotty Bank one night but floated off without trouble on the tide next morning (there is a picture of her on the pontoon in a later post), being fin keeled Sancerre might not have been as fortunate.  Also, there was a small social scene on the pontoon or on other people's boats when it was raining.