Another nice day dawned and I was off a little before the tide turned and in daylight for a change.

The NNW wind remained but not as strong at F3-4 so I was reaching under the cruising chute until off St Albans Point when I motored for a couple of miles to clear some serious over-falls; when the Lulworth range is closed and the sea slight I have previously gone closer to shore where the tide is at least as strong but the water smoother, on this occasion I stayed out a bit to be in better wind - a mistake!

With the tides it was not practical to go straight to Hamble as it would mean battling the tide up the Solent and then getting onto the mooring in the dark with an adverse tide and wind. Getting to Hurst was possible but with a reasonably timed start next day I could get to Hurst from Studland for the start of the next mornings favourable tide and a good chance of getting to the mooring at slack high water without excessive use of the engine. So I went to Studland for the night picking up one of the free to use "eco" moorings placed by marina chain "Boatfolk" to protect the Sea Grass beds and the Seahorses that live in it.

A voluntary no anchoring zone has been established in part of the bay with the threat that it could be made mandatory if not observed, but then the agency has refused to fund marker buoys to delineate the zones and my then up to date electronic charts (all three of them) do not yet show the zones. Really bright, especially as there are already speed restriction buoys in place that could be re-purposed and many users will not have corrected paper charts.

25 miles in five and a half hours.

Sunday was another lovely day although a bit chilly first thing, it made a welcome change to have five consecutive days of very good sailing. I left at 07:00 and with adjacent boats well clear I left the buoy under sail and headed for the North Channel past the Shingles banks.

Again a plan to do the whole leg, at least to Hurst Narrows, under sail was thwarted, this time by a fleet of Danish Folkboats taking part in an important international regatta.

I was able to sail from Hurst to just short of Calshot where I took advantage of a lull in the wind to get the sails down before motoring into wind through a lot of traffic to Hamble.

Getting onto the mooring was tough, as planned the tide was slack but I needed to approach down wind and down river to be able to get off again and to have her bows into the prevailing wind. As I got close the wind gusted up to F4 or 5.
I picked up one of the upstream lines close to the buoy (It's a rule on the river that there are two at each end in case one breaks) but with all of the weed on it I could not get a grip even with my "mooring" gloves on. Finally I was down to the pick-up line and managed to get that through the push pit and onto a winch before I crashed into the boat down-stream saving me from putting the engine into reverse and risking a line round the prop. Timing my pulls with small lulls in the wind I got the stern lines onto the boat at the expense of seaweed from the lines all over the place.
That was not the last problem. I tried picking up the forward mooring lines that attach to the top of a buoy but both were wrapped round the chain riser to the buoy and would not reach the bow, how that happens with another boat on the buoy I don't know. Also the pick-up line to one of the bow lines was cut so it was just hanging down from the buoy.
With the strong wind holding the boat in line with the trot, it was not an immediate danger but when the incoming tide increased the boat would go broadside and then upstream, so I needed to fix the problem or leave the mooring. I couldn't unravel either line and it would likely take too long to inflate and launch the dinghy to get at the buoy. By letting the stern lines right out and using the Moorfast at maximum extension I was able to get a line onto the buoy so the boat was safe and I took a rest to recover from the exertion and to nurse a few strains.
I was later able to use the boat hook to get the mooring line not attached to the pick-up and unwind it, so with my rope-chain-rope bridle also in place I was comfortable in leaving the boat for the mooring people to sort out the other line on Tuesday. Fortunately the diver who looks after the mooring passed in the work boat after giving some diving lessons and came back to help and with his assistant lifted the buoy and we freed the line.
The RAFYC launch was operating so I was able to easily get ashore to have a shower, after a quite night I rowed ashore (there being nowhere to securely store the outboard ashore) on the last of the flood tide (07:00) to make may way home on reduced public transport services due to the funeral of the late Queen, with other disruption on the railway it was a 6.5 hour trip home to get the car 😒.
30 miles in 7 hours. 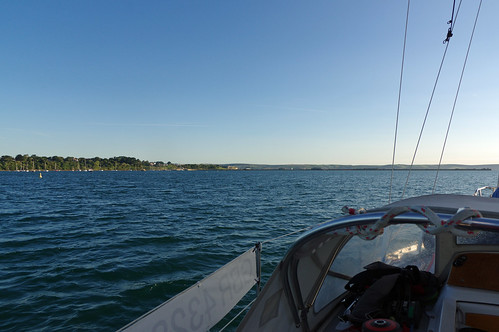 Click here for some stats of the trip and year.
Posted by John Lashbrook at 2:44 PM