Finally, the wind started to abate on Friday and although it was still quite blustery I headed down river to anchor at St Mawes, if that was too exposed plan B was to move to Penarrow Point. At one point I thought plan B might have to be taken as the wind turned out to be westerly rather than the north westerly as it was in the Truro River but things turned out Ok

Passing Falmouth I had to do a double take as there appeared to be an Isle of Wight ferry coming towards me and indeed it was.St Mawes was surprisingly empty, only two of us at anchor overnight and half a dozen boats on visitor's moorings, probably down to the wind still gusting to 20 knots, but there was just enough shelter from the land so that there was only the smallest of waves and the strong wind kept the boat pointing into them rather than swinging with the tide so the motion was minimal. With plenty of space I found one of the deeper spots with about 4 metres at low tide, a necessary precaution as the weekend's spring tide will be very low essentially to LAT (Lowest Astronomical Tide) and a rise of more than 5 metres so I had 40 metres of chain out.
Saturday dawned with no wind and clear skies and contrary to the previous days forecast turned into a lovely day, the latest forecasts (Saturday) is also better for Monday through Wednesday although winds are likely to be contrary. I suspect Polkerris may be too exposed on Sunday and Monday so I may stay here on Sunday night and move direct to Fowey on Tuesday for fuel, water and some shelter if it does blow overnight. Longer term plans are even more up in the air with the possibility of north easterly winds which puts a hoped for excursion to the Channel Islands into doubt. 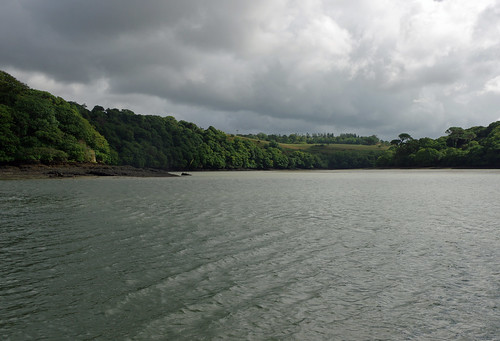 8 miles in an hour and a half.
On to Fowey, Plymouth and Salcombe.
Posted by John Lashbrook at 12:58 PM