The beat to Fowey was comfortable on starboard tack but 'orrible on port with a small short sea stopping the boat in F2 -3 winds, I was making c 2 knots on port and 4.5 knots on starboard. 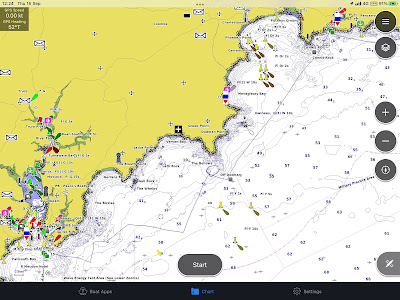 It was very wet on Tuesday so I stayed put.25 miles in six and a half hours.

A pleasant sail to Plymouth in 10 - 20 knots of northerly wind which ran out a mile or so short of Rame Head. Shortly before I got there, I had a briefly unnerving experience when both of my depth alarms went off and then a message came up on the plotter saying I was in less than a metre of water which made even less sense as the boat draws 1.7m. Then it became clear that the cause was a dolphin swimming just under the transducer.

I checked out Cawsand Bay but it would have been uncomfortable with swell coming in from the SE so I moved to Jennycliff Bay on the east side of the sound by which time a moderate south-westerly had set in only to go back to the Northerly during the evening.

23 miles in five and a quarter hours.

I woke earlier than planned and decided to move out with the option of stopping at Salcombe or continuing across Lyme Bay depending on the updated forecast, F6 has been mentioned on a couple of recent ones but the direction was uncertain, either northerly or north-westerly, the latter at F6 would not really be an issue, at least until Portland Bill, the former could be uncomfortable. Both however, together with likely north-easterly or easterly winds setting in after the weekend put paid to a visit to Teignmouth, I did not fancy a long beat to get there and then potentially to the Solent. I also decided not to head to the Channel Isles, NE winds make Braye harbour untenable, and it would be a long haul back.

In the event I put into Salcombe to avoid a forecast F6 and to take advantage of reasonable tides and promised sun on Friday. 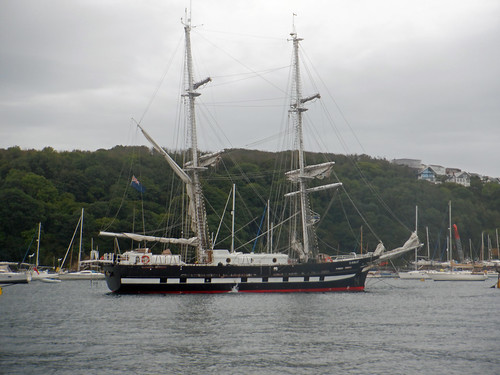