Strong easterly winds set in over the weekend and are likely to be around until Thursday, then some models are showing a strong possibility of gale force southerly winds arriving on Sunday or Monday. It looks as if I will have to make a dash to the mainland on Friday, possibly in fairly rough seas, so that if there is no berth available at Newlyn I'll have time on Saturday to get round The Lizard to find shelter in the Fal.

In the meantime I will stay on the mooring in the Pool at least through Tuesday as the wind is currently east force 5 - 6, then if the wind has moderated, I may move to an anchorage but they are somewhat limited in easterlies and most are popular so space could be a problem. Meanwhile the moorings here are getting very crowded with a mix of English and French boats, mostly quite large.

The showers on the pier were closed but I found one attached to the tourist information office at Porth Cressa close by the laundrette (not self-service) where I had a load washed and dried, they don't do ironing, I can cope with wrinkled but clean shirts.

Update 3rd Sept, whilst weather bound on the Truro River:
Easterly winds persisted so I spent some time trying to get the dinghy's outboard fixed, it had cut out on my last delivery trip to the boat on the Hamble and would only run for a short time. The local outboard company, Island Outboards at Porthloo, were very helpful picking up and returning the engine from / to Sancerre on the mooring. They got it running well enough to use but were unable to completely fix it as they do not carry spares for small Mariner / Mercury engines. Once I had it back, I moved to the nearby anchorage off Porthloo to wait for a weather window to get back to the mainland.
The weather looked reasonable to get back to the mainland on Friday, a good job as very strong southerly winds were forecast for much of the following week, strong enough that I would have had to battle merely strong winds to get back rather than risk southerly gales or severe gales in exposed anchorages or moorings in Scilly - a fate I avoided in July last year by abandoning a trip at St Mawes and rushing back to the Hamble saving me from storm Evert's very destructive winds in the islands that caused many boats both anchored and on moorings to be driven ashore whilst 2 life boats and a rescue helicopter worked most of the night rescuing people. 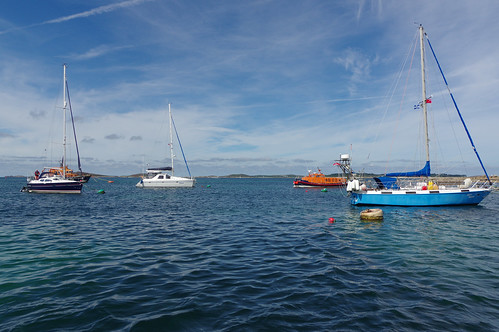 Bailing out to the Truro River

Posted by John Lashbrook at 3:15 PM