Newlyn to North of the Isles of Scilly.

I had thought to visit the Isles of Scilly on-route to Ireland but the forecast models I down loaded after leaving ("PredictWind" makes half a dozen models available twice a day at c 08:30 & 20:30) showed strong north-westerly winds arriving in 2 - 3 days, Scilly is not a good place to be in strong winds, particularly from the NW as there are few anchorages sheltered from that direction and in peak season they would be busy, so I decided to go direct, something that had been on the cards for a couple of days.

This was a good sail albeit tiring as with a variable largely following wind, I was forever trimming or changing sails, I remember bagging the spinnaker or cruising chute 7 or 8 times and gybing at least twice before passing Scilly.

A problem heading across this piece of water to or from Ireland is that you can't head in that direction because of the "Off Lands End Traffic Separation Scheme" this separates shipping heading north and south but the rule is that you can only cross TSS lanes heading, NOT tracking, at right angles, this rule is enforced and people have been fined for non-compliance. So, heading from Gwennap Head you shortly have to steer west and, if you have want the tide to help you before and after the TSS, the tide will take you south. 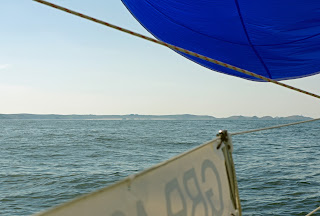 North of Scilly to Baltimore.

As I cleared The Isles of Scilly the wind which had been light increased and backed and I was on a fetch making very good speed, the only problem was that the wind was varying in direction by about 30 degrees and some times more as well as in strength with a short period.

There was very little traffic showing on AIS and with one exception nothing within 20 miles, with mist visibility was not good and after a short rest period I came on deck in the middle of the night to see a green light ahead, the AIS alarm went off a few seconds later, it was another yacht on a reciprocal course and we pasted two or three hundred yards apart in the middle of the Celtic sea, it just goes to show how collisions can and do happen.

About 06:00 on Sunday I managed to pick up a forecast on VHF - powerful coastguard stations with high antennas can reach impressive distances, well beyond line of site - I was picking up French broadcasts all the way to Baltimore. It was bad news, force 6 north westerlies were now being forecast for that night and I would be heading directly into that. Currently the wind was NW at about 6 knots, under sail I would not reach Baltimore for a day and a half in that wind and in a F6 would face a lot of difficult conditions probably forcing me to put into Ireland well north of my objective, So, on went the engine to try and beat the bad weather.

I was only partially successful, I ran into a F5 about 20 miles from Baltimore and for an hour or more, downwind of the Fastnet, I was motoring directly into a F6 which was very uncomfortable and unusually I was wearing my life jacket and hooked on while in the cockpit. I was however impressed with how Sancerre coped with motoring into the wind and waves, spray flying but making 5 knots, 6 knots was possible but just too uncomfortable.

Fortunately the wind eased as I approached the entrance to Baltimore but it was still quite a tense entrance with dolphin playing around the boat in pitch dark, except for light from a major electrical storm to the north. With as it turned out a well founded fear of pots and other hazards I decided not to risk going to the main anchorage which in any case is relatively exposed to NW and W winds (which were now forecast for later in the night) so at 23:45 I anchored just inside on the western shore, as I had done at the end of the 2019 Jester Challenge. Some picture of the entrance are included in the next post. 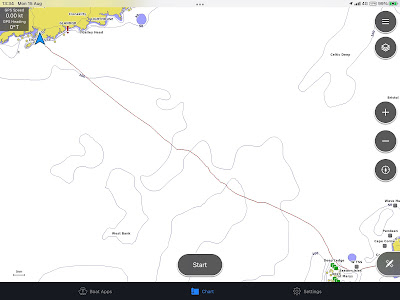 Monday was a rest day with a quick trip ashore for a sandwich lunch at the pub and a visit to the local store which had even less choice than when I was there in 2019.

Tuesday I was weather bound waiting for the long predicted bad weather to pass through which in truth was not as bad as forecast. 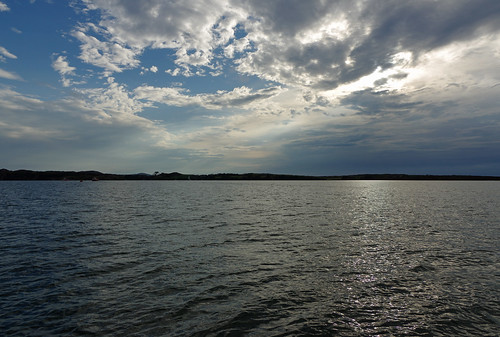