I weighed anchor at 04:30 to get to the Bill as the tidal gate opened, initially I thought there were only two of us taking the inshore route but as I left the Bill there were a lot of boats following behind, either they preferred an hour or two more in bed or they had spent the night in Weymouth and were delayed waiting for the bridge to open.

To avoid getting swept into the Portland Race, described in the Pilot by Tom Cunliffe as "the most dangerous extended area of broken water in the English Channel, overshadowing even Barfeur, the madness of Ouessant and the Race of Alderney", it is necessary to pass within 300 yards of the Bill, and only then in settled conditions.
The inshore route can only safely be used in daylight because of lobster pots which are often hard to see as they are dragged under by the strong current and the necessity of passing very close to rocks. Because to fluky winds caused by the land the passage has usually to be done under power, increasing the risk from Pots, as Cunliffe says the possibility of being anchored to a Pot [as the tide increases] does not bare thinking about. On this occasion the wind was from the NE and I was able to sail from a couple of miles north of the Bill when the wind set in, through the route and across Lyme Bay.
I had a fairly quick passage in variable winds that kept me busy sail changing and trimming with some light relief...... 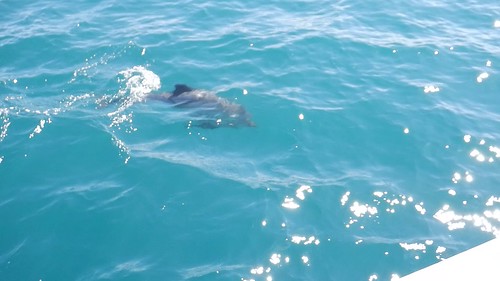 Dolphins doing what dolphins do approaching Start Point.
Shortly after the picture was taken the wind disappeared and I started the engine to get to Hope Cove, the first anchorage sheltered from the easterly winds west of West Bay (Portland) and in the days of sail often packed with ships, up to 80 being quoted in one source, waiting for a fair wind up channel. 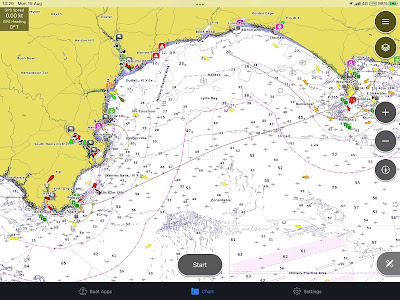 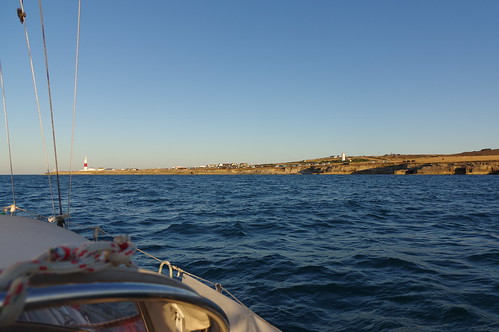 Click here for Hope Cove to Polkerris.
Posted by John Lashbrook at 1:15 PM