A good quick trip, although there were some tense moments with changing winds and shipping. I left at 05:40 for slack-ish water out of the Haven and helping tide once clear of the coast.I saw more dolphins on this leg than ever before, with several large pods seen at intervals from about 25 miles south of Milford right through to the Seven Stones but mainly in the Celtic Sea, also many of the larger animals had a young one, perhaps 2 or 3 ft long swimming beside them.
Video from early afternoon, a bit slow to start but picks up after 15 seconds, no young unfortunately they were early on when it was too rough to film, best viewed full screen. 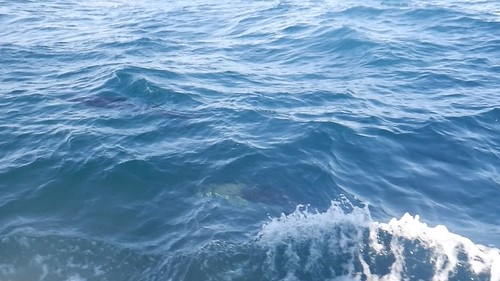 As night closed in, I saw the biggest, brightest and longest meteorite track I have seen covering at least a 30 degree arc.
Initially the wind was quite light from the north but gradually increased to 15 - 20+ knots from the NW before moderating to 9 - 12 knots until I was a few hours short of the West of Lands End TSS.
TSS's can be a pain, you must go with the flow, although yachts typically don't follow them as there is likely to be a lot of ships crammed into a relatively narrow lane, or you have to cross heading (not tracking) at right angles. My plan was to sail west of the TSS and the dangerous Seven Stones rocks NE of the Isles of Scilly.
My waypoint can be seen on the picture above at the NW corner of the TSS, c 20 miles NW of Cape Cornwall, the TSS does not show zoomed out this far, a problem with vector charts on a smallish screen, having been processed by a human being the Admiralty and Imray charts and their raster equivalent always show them, even on the single UK and Ireland chart.
As I sailed south the wind was varying back and forth between NW and NNW, which kept me busy adjusting the wind vane steering to keep on course, I did not want to get too far north as that would put me down tide of the TSS. At about 19:00 the wind backed to the west which made getting to my waypoint a problem without tacking, the wind speed also increased to around 13 knots and I was hard on the wind, at 22:40 the wind backed further to WSW and I noted in the log that even with a bit of help from the tide I probably would not weather my mark, that was sealed a short while later when the wind came round to SW.
Meanwhile I was kept busy, a cruise ship, a ferry, several large container ships and several smaller ones, came out of the north bound TSS and headed my way. I ended up changing course 3 times to keep clear - I was officially the "Stand on vessel" but it does not make sense to get too close to ships that are 2 - 300 yards long, even with AIS advertising your presence and showing both parties the closest point of approach, their course and speed will usually be steady and predictable whilst mine will be varying with the wind speed and direction.
Around midnight it was clear that I was not going to clear the TSS so there were two options, I could stick to my original plan by putting in a tack probably heading WNW before heading south or to go down the TSS, perhaps under engine if I could not hold the course. I decided on the latter course because the former:
I would have preferred to pass down the western edge of the lane but with the wind and tide, that turned out not to be possible so it was down the eastern side. In fact it proved difficult to reach the lane at all but I entered at 02:00 after giving a heads up to Falmouth Coastguard who are the controlling authority. It was a struggle to stay in the lane for the first 3 hours, all against the tide. During that time four ships including a large Ferry went past, the two smaller ones ploughing down the middle, the two larger ones sensibly going down the west side for maximum separation.

Then the wind started to veer, initially to the west which would have meant a beat to the Scillies, fortunately it later went further, back to the NW of the previous day. With no ships coming down the lane I moved across to the western side of the lane and then headed for St Mary's keeping to leeward of the Seven Stones.

There were some very big steep fronted waves from the Seven Stones until in the shelter of the Islands, but they were well spaced and I was somewhat off the now stronger wind sailing with two reefs in the headsail and one in the main, and Sancerre gave me a reasonably comfortable ride.

Porth Cressa is a good anchorage in a north westerly but there were already a dozen boats anchored there and space for fin keeled boats is limited, tired I took the easy option and went to St Mary's Pool to pick up a mooring, it is not the best pace to be in a fresh NW wind but I didn't think I would have a problem sleeping and the wind was due to turn to the NE on Saturday and easterly on Sunday.

There were lots of buoys available which surprised me - it was crammed when I was there a year previously to the day. I thought that it might be the wind direction that had put people off. At the time of writing (Late Saturday, the day after my arrival) there are still few boats in, perhaps that will change with easterly winds helping people get her from the south coast and from France (where the majority of the visitors normally come from, at least pre BREXIT and Covid).

125 miles in 28 hours 30 minutes for an average of 4.4 knots with the engine used for less than two hours getting out of Milford and into St Marys.

Click here for my stay in the Isles of Scilly.

Posted by John Lashbrook at 5:55 PM