It would be best for new readers to check out my new (Nov 2022) blog introduction (Opens in a new tab / window) that explains how I go about writing the blog, its limitations whilst I am writing it whilst cruising and what some terms mean.

A north easterly breeze delayed my departure for half an hour as the boats were being blown inshore onto the pickup line, moving it to the other side would not help as the boats downstream would block my way out shoreside where there is little water at low tide. I had to wait for a lull and for the flood to start overcoming the wind allowing me to get the boat out. Once out it was a bit tricky getting into the main channel as there were dozens of boats going down river, on the third attempt I made it out and joined the queue to get out of the Hamble.

It got rather dangerous around Hamble Point Buoy when two idiots driving large displacement power boats in the middle of a large group of boats abruptly accelerated creating a huge wash Sancerre, about 30 yards away, rolled a gunnel under and I suspect at least one other boat did the same. There could easily have been collisions especially if boats had still been on autopilot which generally can’t respond to such violent deviations quickly enough, fortunately I saw it coming alerted by the roar of engines and grabbed the tiller in time and “only” briefly went about 45 degrees of course.

The rest of the trip across to Cowes was straightforward and went as planned, slipping in ahead of a 200 boat parade celebrating the jubilee and lots more ready to start a race from the Royal Yacht Squadron’s line off west Cowes.

Reaching the Folly Inn, I managed to get a slot without a boat rafted on me to make an early start practical, albeit with large catamarans in front and behind but I would be leaving heading into the flood tide so getting off in the forecast calm conditions would not be difficult.

A pleasant evening followed with decent food albeit chaotically served, most had finished theirs by the time I got my starter and I and all having the same main course did not get served until everyone else had finished theirs. After declining to pay for everyone, I paid my bill and was back on board fairly early and with the planned early start was in the bunk promptly.

A still unexplained bump in the night woke me at 04:00 thirty minutes before the alarm, there was no point in delaying, so I was under way at 04:30 springing off the pontoon with no trouble. The forecast was for variable winds F2 or 3 occasionally 4 but except for a few minutes I did not see F4 and was mainly sailing in F2 or less, so it was a bit of a struggle.

The trip down the Solent was slow but pleasant in a NE wind sailing with the cruising chute and main but the wind gave out as I was just short of Hurst Castle and with commercial traffic coming the other way I put on the engine to go through the narrows into the north channel making c 10 knots over the ground, well before N. Head buoy I had the engine off making progress under sail. 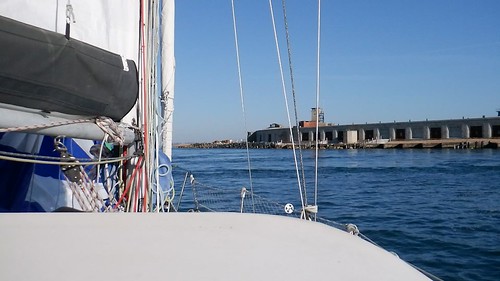 Passing Hurst narrows and into the North Channel making up to 10 knots
over the ground - it would have been faster at springs. The cruising chute
"snuffed" but still up ready to be redeployed a few hundred yards later.

Short of Anvil Point I was only making c 2 knots and it was clear I would not get past Anvil and St Alban’s Head before the tide changed so I reverted to engine because I wanted to get to Portland to take the inshore route at the optimal time on Monday, a days delay would mean starting an hour later on Tuesday. The wind perked up short of St Alban’s so I reverted to sail but should have held on for another twenty minutes or so as I missed the tidal gate and spent a long time getting past. 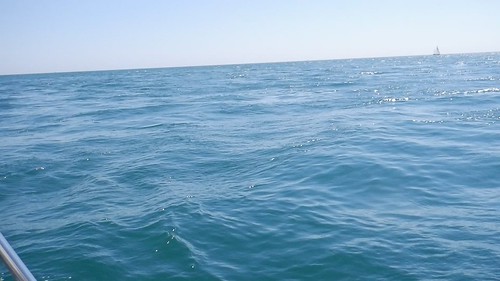 Punching the tide off St Albans under sail. You would not want to be
here in bad weather! 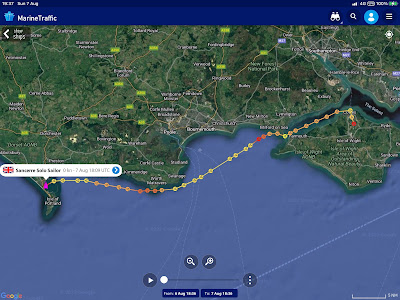 50 miles in Fourteen and three quarter hours of which 4.5 was under power but that did include well over an hour getting down the Medina river and more entering Portland harbour. 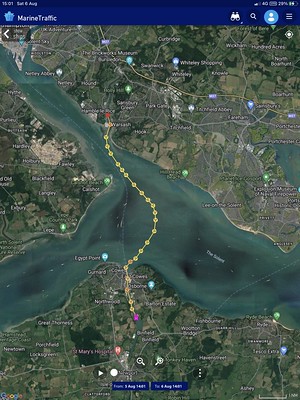 Click here for Day 3 to Hope Cove.
Posted by John Lashbrook at 4:58 PM