The trip from Youghal was tedious, damp and unpleasant, the (short) night at Dunmore was worse.

The plan was to head for Waterford or one of the anchorages on the 10 mile long estuary leading there. I set off in overcast damp weather with little wind, after a couple of hours sailing the wind failed completely and I ended up motoring the rest of the way in a choppy sea.,

Drizzle was followed by bright sun but with a shallow fog giving variable visibility, generally half to one mile but it closed to a few boat lengths as I approached Dumore East and the entrance to the estuary, dodging a lot of pot buoys. Travelling up it in thick fog was not attractive so I headed for a small anchorage next to the Dunmore East harbour.

Visibility had improved somewhat but was still less than 300 yards, measured by radar and GPS as I passed the harbour wall. A couple of hours after I arrived the fog cleared but it would now be a long struggle against a foul tide to continue up river and the weather forecast suggested that the next day would be a good time to head to Milford Haven, take a rest day there and then hopefully pick up a favourable wind to The Isles of Scilly on Thursday.The pilot does warn that the anchorage is susceptible to swell but as can be seen from the photo above, there was very little. This was deceptive, late in the evening the boat swung broadside to the swell which was of just the wrong wave length for Sancerre, a shallow gentle roll was amplified by each successive wave until she was rolling wildly, the cycle would break then start again.  It was violent enough that I had to wedge myself into the bunk but by one in the morning it was apparent I would get no meaningful sleep so I decided to leave.

I motored out of Dunmore for a couple of miles, another mile would have been useful to clear Hook Head and associated over-falls but with pots about and the night being very dark I changed to sail in light winds. These picked up through the night and I had a good sail reaching right across St Georges Channel.

Just past Grassholm the wind died, with the tide changing I would not get to the entrance to Milford before the next favourable tide and, with rain starting, on went the engine. The water off St Ann's Head west of the entrance to the Haven was incredibly rough given slight to moderate seas previously and only c 4 knots of wind. Two knots of west going tide was probably the reason but I have not seen it on previous passages.
After an early night I thought the wind and wave gods had it in for me, the wind backed to the SE and increased. The Dale Shelf anchorage has no shelter from this and the boat stated bucking about, not as uncomfortable as the roll in Dunmore East but not good and there was always the chance of a dragging anchor or getting bad enough to require a change of anchorage. Around 02:00 the wind veered and moderated, so all was well.
80 miles in 16 hours. 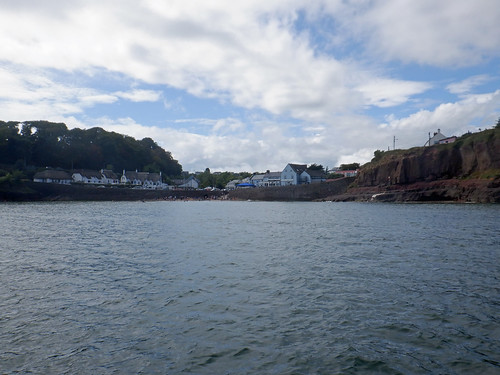 Click here for Milford - The Isles of Scilly.
Posted by John Lashbrook at 1:57 PM