I had planned to be in Waterford on Saturday to avoid strong winds on Sunday then head for Milford Haven on Monday to pick up favourable winds to make for the Isles of Scilly on Tuesday but the forecast has changed again. The wind remains unpredictable, forecast strong winds not being as strong as predicted, light winds somewhat stronger and timings changing with every download.

But there looked to be a window on Wednesday to move along the coast before more strong winds on Thursday, Glandore looked to be an attractive anchorage but I could get there in just a few hours so I decided to move to Kinsale.

I left at 07:00 with light winds and once having made my offing I spent the day reaching in winds varying a little in direction from N to NNW and occasionally NW and significantly in strength from a few knots to 20 when I was making > 6 knots on a beam reach with 2 reefs in the main and genoa. I made good time until short of The Old Head of Kinsale when the wind died, after struggling to get round the headland against the tide in light winds I put the engine on half a mile short as I wanted to get into the river at low water before the flood would potentially make getting onto a berth tricky.
The marina in the town of Kinsale was essentially full with boats gathering for a race to the Fastnet Rock and could only offer an outside berth rafted up, perhaps 3 or more deep. That is problematical single handed, firstly getting on to another boat if there is some wind or tide and no one on board the other boat to take your lines or to get away early in the morning if there is a boat outside you.
The Castlepark Marina across the river did have a space, also on the outside but not rafted, the down side was that it is exposed to the SW and as I write (Thursday) the boat is being bounced about a bit in a F5-6 wind, hopefully the new paint job will survive it! Also there is no shop and the pub does not do food even bar snacks, so I am down to ships stores with a few remaining fresh items. It would not surprise me if I am here for a while, the Irish Met service forecast is not encouraging. 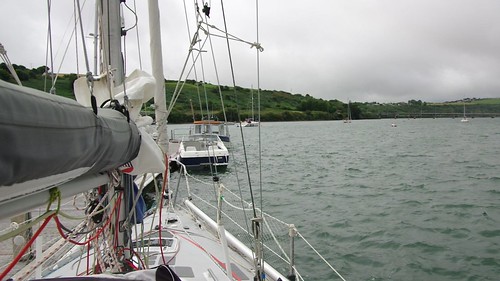 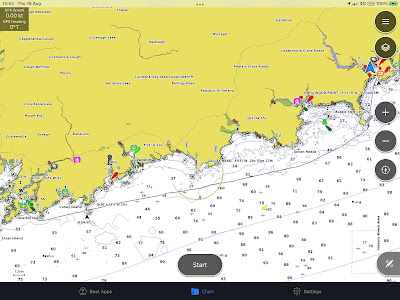 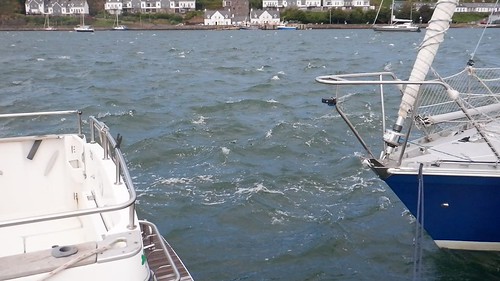 Still here on Saturday, A little bumpy in 20 knots of wind, earlier
on it was blowing over 30 knots and things got rather wild with
fenders being forced up and out, fortunately I have a lot of fenders.
Yesterday the manager of the marina gave me a lift into Kinsale for lunch and a little shopping so I have some fresh food. A 10 Euro taxi ride back with retired fisherman with some tales to tell. 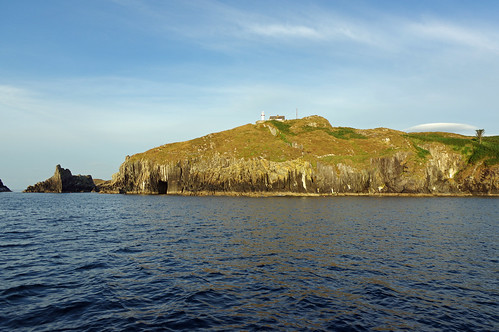 44 miles in nine and three-quarter hours.

Posted by John Lashbrook at 2:24 PM