An early start (04:50) was rewarded with a great sunrise over Ardalanish. 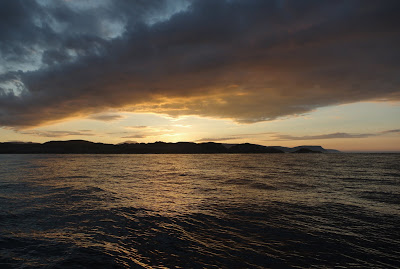 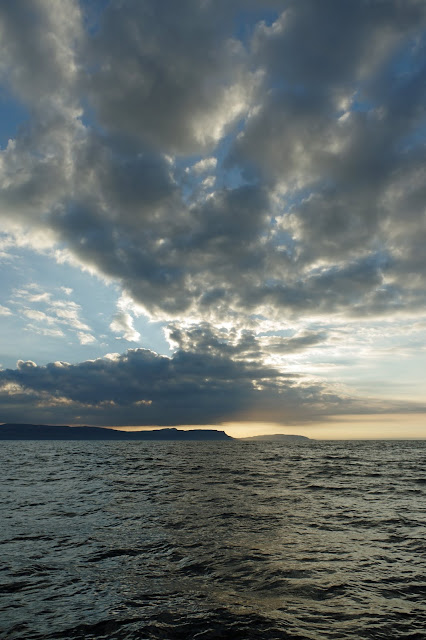 I had left so early because on waking there was a nice north easterly breeze and the tide was due to turn favourable in an hour or so, both turned out to be false hopes but that was not really a surprise. On leaving I had four possible destinations in mind, Loch Spelve, Oban, Port Ellen on the south of Islay or an anchorage in Glenbatric bay (where I anchored last year) on the north side of Jura as an overnight anchorage before going to Port Ellen to get there before strong winds arrived. 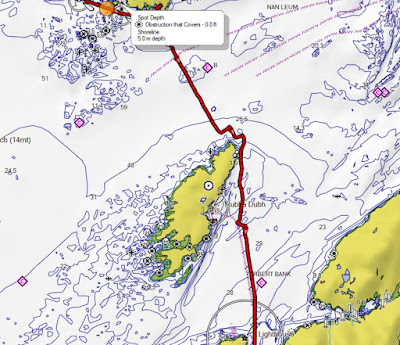 The obvious thing to do was take a long port tack to position for a dash to any one of the above depending on what the wind did, very quickly the wind veered to the east and I was heading to clear the north end of Colonsay and making 3 - 4 knots but without the help of the hoped a lea bow tide.

A couple of miles north of Colonsay the wind veered a bit more and I tacked thinking  I would clear Colonsay but the tide and further shifts in the dropping wind required a  second tack.

It was touch and go whether I would make it without another but the tide finally turned and I cleared the steep too shore by 50 yards.

With the wind in the east Loch Spelve and Oban did not seem attractive so I pressed on to the south in the fading wind, as can be seen on the plot above the wind was also variable in direction until it finally died completely, I gave it half an hour and then switched on the engine, by doing so then I would be able to make the tide at the northern end of the Sound of Islay, to delay much longer I would have had to anchor off and wait till next morning to move further south.
A couple of miles off the wind started to fill in from the south at 5 - 8 knots but I kept the engine on as I would not have made the tide beating to windward.
Slide show of all my pictures from Ardalanish to the Sound of Islay, page through by clicking the arrows or click in the centre of the pic to view from Flickr in a new window or full screen: 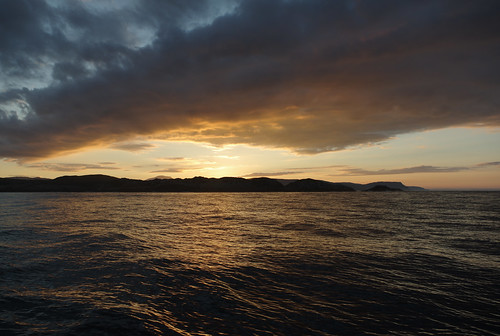 Click here for the onward trip to Port Ellen.
Posted by John Lashbrook at 9:46 AM