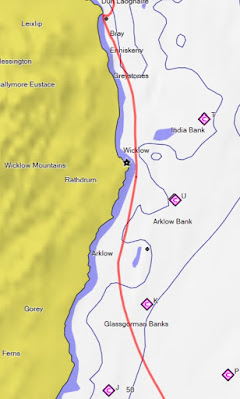 The time had come to bite the bullet and do a long leg across the Irish Sea, ideally I would have carried on down the coast inside the off lying banks, had a night at anchor (due to Covid marinas, harbours etc. were off limits) before making a "short" crossing to Wales or a longer one to Cornwall.

Two factors ruled this out, the wind was forecast to be northerly veering east and I did not want to cross to Wales against an easterly and second there are no sheltered anchorages along this stretch of coast or on the north Devon and Cornish coasts, although Padstow harbour gives good shelter if the tide allows you to get in over Doom Bar.

I therefore would have to go direct. Milford Haven seemed a good option especially as I was likely to find there competitors from the recently finished Jester Challenge, that if I had not been delayed I would have been doing.

That decided, a decision was needed on which channel to take through the dangerous off lying banks. There are significant over-falls off of the Arklow banks and with a brisk Northerly wind I decided to follow the coast for about 40 miles and exit south of the Arklow and Glassgorman banks.

The trip down was almost a dead run which with a  quartering sea was quite uncomfortable, but less so than some of the previous legs, the wind on the way over was F4-5 mainly the latter with gusts well into F6 and I made very good time. The entire trip was done under the headsail alone, much of the time reefed. 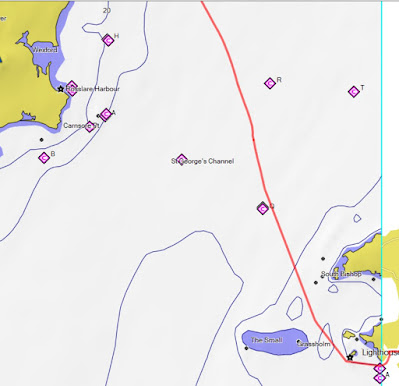 Unfortunately I was not quite quick enough to get the last of the favourable tide between Skomer Island and "The Smalls" (an area of Islets, rocks and reefs annotated on the charts as an "Area to be avoided") and into Milford. If I had been an hour earlier at St Davids Head I would have been at anchor 2 or 3 hours earlier than I managed.
The entrance into Milford requires care at night, of course it can all be done using GPS but I like to identify the lights etc. and  there are a lot of them. I headed to Dale Shelf anchorage in the NW corner of the Haven which is large and reasonably sheltered from the northerly wind.
Annoyingly the half moon set when I was a about a mile short so it was very dark as I felt my way in not in this case helped by any shore lights or lights on the delimitating buoys one of which I almost hit. I anchored well clear of permanent moorings at 02:30.
110 miles over the ground in 21 hours averaging over 5 knots with the last few miles under engine well below that because of the adverse tide.

Click here for time in Milford Haven and a change of anchorage.

Posted by John Lashbrook at 3:25 PM