The weather yesterday and last night was no where near as bad as has been forecast for days, although it would have been very hard sailing. Today the forecast was for S - SE 3-5 and there was no point in staying tied to a pontoon so after a last minute shop I left shortly after 10:00 for the Island of Gigha and to an anchorage "Bagh na Doirline" at the norther end, which the Antares charts said had good holding and shelter.

As usual on this trip the wind was cold, although not as cold as on the first 40 days. It was on the nose coming out of Port Ellen so I motored for an hour to clear the outlying dangers before heading of to the NE, initially under a reefed headsail but still making c 5 knots, after an hour or so the wind started to drop and I was under the full genoa and more comfortable as the waves dropped partially due to the lower wind and partly due to shelter from the Mull of Kintyre. 5 mile from the anchorage the wind dropped further and I was only making a little over 3 knots so up went the mainsail.

The wind is now (16:45) increasing and it could be over 20 knots this evening but that should not be a problem as tomorrow promises to be much the same as today and I will move closer to Crinan, in good time to go down the canal on Monday.
I have not seen this before, in the evening a fishing boat anchored nearby, then a second larger one rafted up on it. They were still there at 23:30 but gone at 08:00 next morning.
20.2 miles over the ground in 5.5 hours.
Slide show of all my pictures from Port Ellen to Gigha , page through by clicking the arrows or click in the centre of the pic to view from Flickr in a new window or full screen: 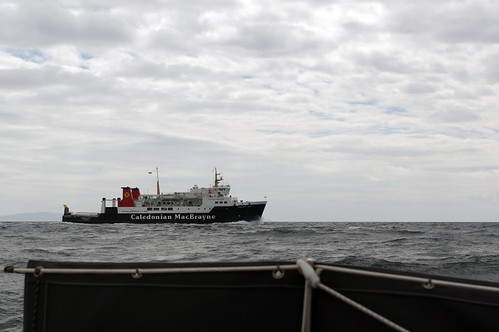