I woke late and found a report on Facebook that a couple of Jesters might be in Angle Bay to the east but there was a familiar looking boat with a blue ensign  two or three hundred yards away on the pontoon moored near the moorings so I pulled up the anchor and went over to take a look before moving east. There I found Chuck with his Sadler 29 J'Hana, a fellow member of the RAFYC who had done the 2021 Jester and the 2019 Jester Baltimore. In front of him was a veteran Jester Challenger David and his Achilles 840 "Headway III".

The three of us had a good natter and a look at each others boats before deciding that the strengthening wind and increasingly choppy water was not going to make this a sustainable berth, especially with a poor forecast, so Chuck and I moved to Sandy Haven Bay a short distance east on the north coast of the Haven likely to give much better shelter. David, who was well rested decided to head for Padstow, N. Devon before the forecast strong northerly winds arrived.After a peaceful night Chuck moved on to find a rare marina berth to pick up his wife who was coming up for a short holiday.
If the forecast is accurate 2 days out, and you never know it might be, I will probably use the last of the strongish wind on Tuesday morning to make a dash for Newlyn - the winds do not look good for a hoped for excursion to Lundy.
Curry night tonight and I just realised I didn't bring any ginger 😒
Slide show all of my pictures from Sorrento Bay to Milford Haven. Page through by clicking the arrows or click in the centre of the pic to view from Flickr in a new window or full screen: 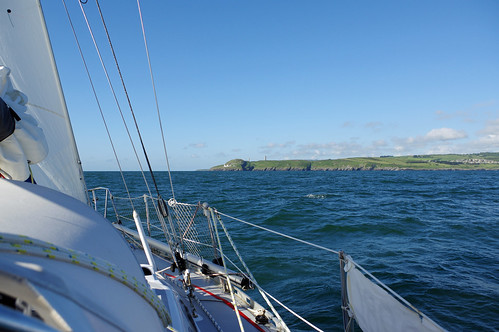 Click here for the trip to Newlyn.
Posted by John Lashbrook at 4:01 PM