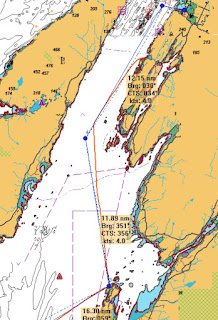 I had planned to explore some of the mainland lochs as I went north but the weather was miserable, overcast with mist, drizzle and the inevitable chilly wind (I was back to wearing 2 fleeces) so I decided to make use of a favourable tide of up to about 2 knots to get close to Crinan and hopefully to get into the basin the next day (Sunday) to enable an early start on Monday.

The wind dropped shortly after leaving and I almost put up the spinnaker but the forecast was S - SE F3-5 and there were some big clouds upwind so I waited for about threequarters of an hour and suddenly it was blowing 15-17 knots. With the 45 sq. m asymmetric cruising chute that would have been a bit of a struggle  to get down but single handed  the 60 sq. m symmetrical I would have put up would have had a real challenge.

So I was feeling vindicated as I went up the loch making 7 knots over the ground under the headsail alone.

There are a number of small anchorages and a bigger one about five miles from Crinan so I went for the smallest, highly recommended on the Antares chart, unlike the main Carsaig anchorage close by  described as "usually an unattractive option".

20.1 miles over the ground in just under 5 hours with less than 20 minutes on the engine, and that included a 5 or 10 minutes battery charging the batteries whilst I backed up the anchor, just in case given the  size of the anchorage.
Slide show of all my pictures from Gigha to Eilean Dubh , page through by clicking the arrows or click in the centre of the pic to view from Flickr in a new window or full screen: 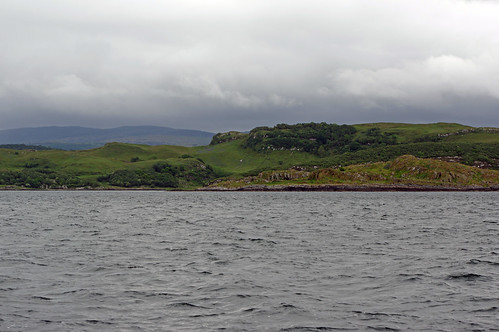 Click here for the quick hop to Crinan and into the canal.
Posted by John Lashbrook at 4:08 PM