The forecast was pretty much correct and I left Sandy Haven Bay at 05:15 on Tuesday on a clear day and headed out into the Bristol Channel, the plan at my default usually optimistic, speed of 4.5 knots would get me to Newlyn shortly after 07:00 on Wednesday and give me a fair tide and hopefully smooth water rounding Lands End.

The light wind gradually increased as I motor sailed down the east channel out of the Haven and I was sailing in a nice Force 4 with the mainsail and poled out genoa well before reaching the Turbot Bank buoy, the wind dropped a little and I replaced the genoa with the cruising chute flying from the spinnaker pole. The wind was NNE and I was on a dead run with 2 knots of tide pushing me westwards. I hung on for a good while hoping for the wind to back a little as per the forecast before giving in and gybing.

A little before 10:00 I passed what appeared to be a dead bird in the water, a few minutes later it crash landed on my head, it came from behind so it was a bit of a shock! 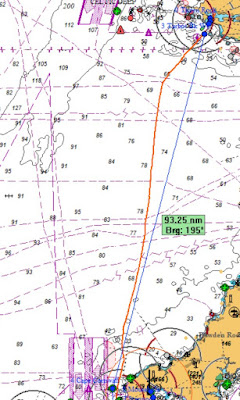 Coming into the coast that evening having averaged over 5 knots through the water it was clear I was going to be very early at Cape Cornwall and Lands End and the tide would be against me. The sky was still clear, the sea fairly calm, the wind about 5 knots. There would be good light from the moon so I decided that I would go in close to try and find the counter current reported to be found there.
That was another failed plan because the wind suddenly filled in again at 15 knots, against  2.5 - 3.0 knots of tide that quickly built up a very nasty sea and I was surfing down steep seas at 7 knots, that was getting dangerous, a reef in the main helped reduce rolling for a while but in the end I took the main down and motored slowly on as the wind dropped, not long after the sea reduced to an extent that it was a non issue but I was still heading into a strong tide until I reached the "Long Ships" off of Lands End at about 04:00.
Once I had passed this reef I headed up to pass just out side of "The Runnel Stone" as the wind came back up and I sped on under sail to pass Mousehole at 05:00, the harbour at Newlyn looked very full so close to my planned arrival time I dropped anchor in Gwavas Lake outside the harbour for a very brief nap. The harbour master and staff where at work when I woke up and told me some boats had left and there were a couple of berths spare so I moved in mid morning. 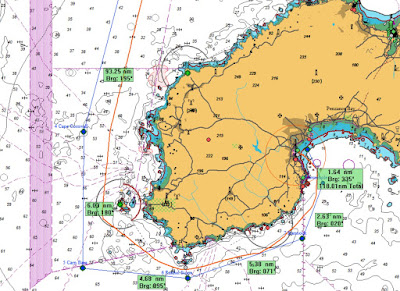 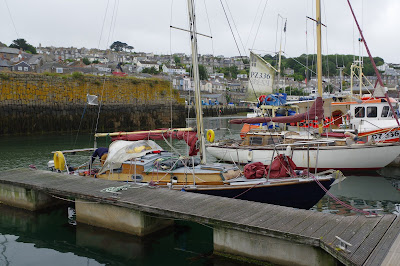 120 NM over the ground in 26 hours.
Slide show all of my pictures from Milford Haven to Newlyn. Page through by clicking the arrows or click in the centre of the pic to view from Flickr in a new window or full screen: 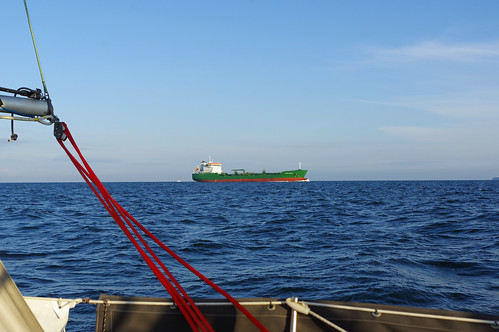 Click here for the leg to St Mawes.
Posted by John Lashbrook at 7:00 PM