Leaving the canal on Monday afternoon the weather forecast for the next day was iffy and getting worse thereafter and potentially very bad next week, but perhaps OK to get further south to Campbelltown or somewhere on the mainland on Tuesday.

I had hoped to go through the Kyles of Bute but that was not going to work given the weather and the area is very short of good anchorages, there are lots of marinas - but I am allergic to them except when I really, really need a shower or to do the laundry. The medium term forecast shows good weather down south and poor weather up here so I have decided to go south ASAP, probably to N Ireland but going where the wind will take me without excessive  motoring or bashing into strong headwinds. 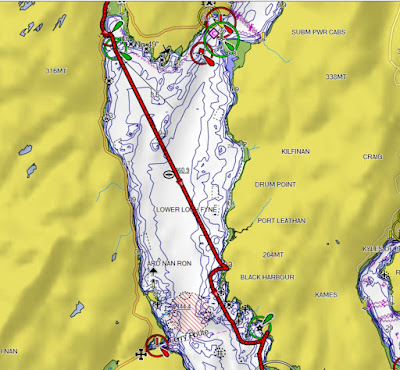 Before deciding on the next leg I went to an anchorage for the night, one which looked to be sheltered from winds a bit west of south.

The next morning the forecast was for southerly winds F4-5 occasionally F6 so going south directly into it did not appeal so I moved a couple of miles south to the marina at Portavadie, a man made inlet originally dug from solid rock as a dry dock for building oil rigs but now a rather swish small resort with a marina.
At the time of writing (Wednesday) it looks like the strong southerly winds will persist through tomorrow and the plan is to leave early Friday morning when the wind is meant to turn to the west and make for Northern Ireland, probably Ardgass but depending on the wind.
It now looks like the depression promised for next week will track further west but 30 knot winds are still on the cards so I need to be somewhere safe by Tuesday before they arrive.
In total Eilean Dubh to Portavadie over three days, 25 miles i 13 hours.
Slide show of all my pictures from the Crinan Canal to Portavadie, page through by clicking the arrows or click in the centre of the pic to view from Flickr in a new window or full screen: 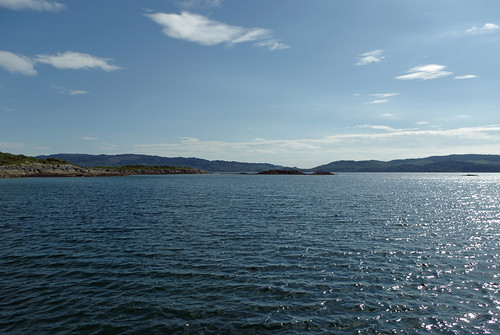