The forecast for Saturday was for light winds increasing in the afternoon with possibly strong winds on Sunday, and worse they could be from the east which makes many of the anchorages I had in mind untenable. Complicating the decision was the likelihood of Fowey being full up, its happened to me before and this year Covid is stopping people going to France or taking non-boating holidays although the reverse is also true with no French boats coming to UK.

I came up with yet another cunning plan which for once worked, by leaving quite early I would get a few hours fair tide up to Dodman point and arrive at Fowey around mid day by which time boats going east would be long gone and boats going west should be on their way on the west going tide, so there was a reasonable expectation of getting a mooring. And if the forecast improved I could make a last minute adjustment to the plan and anchor off of Polkerris near Par Sands.

The forecast did not get better on Saturday morning suggesting F4 - 6 cyclonic (that is changing in direction) and occasionally F7 in the west (probably west of Lands end but possibly further east) so I went with plan A.

I was a little late in leaving at 06:45 but there was little or no wind so it did not make much odds and I sailed in very light winds, with the cruising chute for much of the time, until the tide turned off Dodman  a little after 10 and I started going backwards, so I put the engine on to get past and onto Fowey from which at least a dozen boats were leaving, a good indication I would get a mooring. Typically a light (later moderate) sailing breeze came up as I reached Cannis Rock buoy, just where I would normally be thinking of taking down a spinnaker to enter harbour.

There were plenty of moorings available and I was on one of them by 12:15 ready for lunch on a nice warm, even hot, afternoon. All the moorings were taken by 18:00 but only a couple of boats had to raft up and they did not come near me, probably because the were bigger than me (on a buoy, the harbour authority say rafted boats should be about the same size) but possibly because I was next to some big boats in one of the more crowded areas. 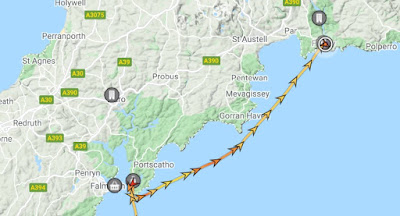 On Sunday the weather returned to mist, rain and a fairly strong wind but it should largely clear for tomorrow, I'll be heading east tomorrow (Monday) probably for Plymouth, a short leg but the tide is not good to get to Salcombe or around the Start and the wind is likely to be light and variable.
21 miles in 5.5 hours.
Slide show all of my pictures from St Mawes to Fowey. Page through by clicking the arrows or click in the centre of the pic to view from Flickr in a new window or full screen: 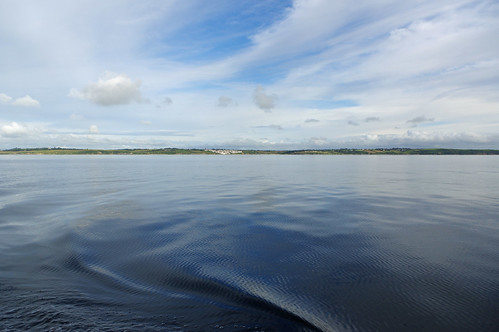 Posted by John Lashbrook at 1:11 PM