After the delayed start described in the previous post I went out with a bit more tide than anticipated, not significant in the channel or over the bar, but it was further out with some a fairly rough sea, especially during the first couple of miles until I made my offing, I delayed hoisting sail until then rather than work on a seriously bucking and rolling deck.

The SeaFeather self steering gear doing its job beating
to windward in a F5 wind leaving Lindisfarne.
The weather forecast caused some confusion, the one I had when I left said that the wind would back round to the NW so I headed off to the west of the rhumb line.
Then the next forecast said it would be NE so I put in a tack, that lasted for about 4.5 uncomfortable miles with the waves slowing the boat so I tacked back and boat speed over the ground almost doubled.
The wind died after about 35 miles and became variable for the next 45 and I was largely motor sailing before the wind set in from the NW and I was able to sail up past Aberdeen until 3 or 4 mile short of Peterhead when the wind died again so, being very cold and not wanting to hang about, I put on the engine and made my way into Peterhead marina arriving after 28.5 hours and 186 miles over the ground.
The prognoses for getting to Stromness was not good with variable but largely light headwinds, stronger winds then expected on Monday and very strong ones shortly afterwards. Forecasts on Sunday morning would be the deciding factor.
On Sunday morning after a lot of sleep I checked out the forecast which was still equivocal with 5 models giving slightly different results for the waters south of Orkney, the complicating factor was that to make a safe passage into Scarpa on Monday morning I had to be off 2 miles off Duncansby Head (the NE point of Scotland and still a good distance from Stromness) at 05:35 or shortly after, if not then the next "gate" opened at 17:50. And the bad weather would probably start to arrive early evening on Monday, a rather risky situation which with light headwinds would likely mean motoring all the way, but at least I could change to option two.
The second option was to move to Wick and wait out the bad weather there, that could easily be done in the time available, at least with a lot of motoring, but I decided to wait it out in Peterhead, the clincher was a forecast low air temperature of just 2 degrees C and another full night at that temperature was not something I was keen to do.
The forecast for the next week or two indicates it could be a good while before I get to Stromness, the models are changing frequently but from the 08:00 downloads on Sunday the earliest I will be able to leave is Thursday but I suspect Friday is more likely, perhaps with a stop off in Wick to catch a weather window. Then according to some models there is more bad weather coming. 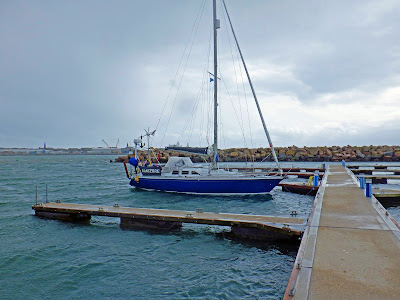 There were no facilities open in the marina but at least it was an easier walk into town than at Blyth and better shops with a good Morrisons supermarket (with open toilets) and a laundrette where I had all my laundry washed dried and appropriate pieces ironed, the later being something of a luxury whilst cruising.
Update:
The weather did not cooperate and it was not until Sunday 9th that there was a window long enough to risk the passage.....
Click here for days 25 & 26, Peterhead to Hunda Sound.
Posted by John Lashbrook at 5:29 PM