The day started with light winds and quite big waves from previous high winds, I slipped at 06:00 and motored north until 09:00 when some wind got up. Unfortunately it was almost dead astern, with a "sloppy" sea and the prospect of more wind to come I started with just the headsail but quickly changed to the larger cruising chute.

Sailing with just the cruising chute and no mainsail allows it to work on a dead run, with the mainsail up it collapses. The alternate is to fly the chute or the symmetrical spinnaker from the pole but setting that was too much like hard work and with variable winds and a choppy sea was unlikely to generate a lot more speed as I was already making 5 - 6 knots and only needed 4 knots or a little more to make the tidal gate to enter the Pentland Firth.

The wind finally settled to a nice force 4 from the south east and I made good progress, there was even some sun! And whilst it wasn't particularly warm it wasn't cold and I went until evening with warm feet 😀

For a while I even took a lead from sailors in the trade winds with two headsails, or in my case the cruising chute and genoa which makes the best of a dead run, never a happy point of sailing, without the bother of a spinnaker which would have been a bit of a hand full in the prevailing conditions. It also means you don't have the mainsail flapping about and wanting to gybe and with all of the power in front of the mast it makes the boat more stable, a bit like having front wheel drive and not having the power on the back wheels and the weight further back trying to flip you round - and in the case of the old Porsche 911s frequently succeeding! The down side is that the cruising chute can't be dropped behind the mainsail so care is needed even with the snuffer, in an emergency it would be gybed onto the genoa before lowering.

Tides run strong though the Firth, even out of races they are often faster than many yachts can run under engine, Sancerre has more than twice the power originally specified and can move somewhat above the maximum theoretical hull speed of 6.8 knots, and that is not sufficient to stem the flow even before it really gets going. Timing is therefore critical, to get to Scapa flow from the south or south east the pilot recommends being 2 miles east of Duncansby Head 1 hour 15 minutes after High Water Dover as the tide changes and then to follow the planned track shown by the blue line on the chart below, that does not mean pointing the boat in that direction, at the best of times the current will push you away so you go across crab wise.
I was  about 2 hours ahead of schedule at 19:00 when the wind died so to be on the safe side I used the engine to get further ahead of plan heading for Duncansby, after a couple of hours the problems started as the adverse tide was far stronger than estimated and this worsened the already awkward sea formed by 2 - 3 metre waves coming from the NW and SE. 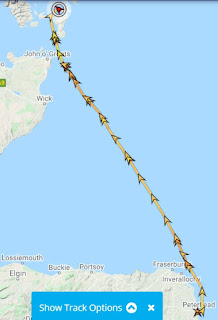 Finally I almost came to a halt 5 miles short of the off Duncansby Head waypoint despite making over 6 knows through the water and sometimes surfing the big waves at 7.5 knots. This stretch of water does not have any tidal prediction Diamonds, severe tides are not mentioned in the pilot and it was mid way before neap and spring tides so it is likely that part of the problem was weather systems to the West, NE and SE. Certainly the tide was late as it was against about an hour after it should have turned, at least the tides within the Firth would also be delayed.
I was well over an hour late vs plan passing the Pentland Skerries and moving at over 6 knots in calm water the autopilot was steering more than 45 degrees above the desired track to stay on it. Passing the Lother Rock the tide was running at over 6 knots and to make progress I allowed her to fall off 30 degrees for a short while to get out of the east-west channel, if I had been any later and the tide correspondingly stronger I would have had to bail out going well south of Swona and the dangerous race on its south side.
And just to make life more interesting two merchant ships were moving west through the Firth and one moving east all crossed less than a mile ahead of me and one about a quarter of a mile, not a major problem with AIS (Automatic Identification System) and Radar, and particularly at night when ship's lights make judging angles and relative movement easier, but it certainly kept me busy.
It was now well past 02:00 so I went on to Hunda Sound for the rest of the night.
I was unable to contact Stromness marina until late Monday morning by which time the weather was looking iffy with a strong wind and rain promised for this afternoon so I will be staying here tonight and will move on tomorrow.
98 nautical miles over the ground, and more - about 117 - through the water, in 22 hours.
Click here for Hunda Sound to Stromness.
Posted by John Lashbrook at 4:05 PM