I arrived off  Lochcarron half an hour after another single handed sailor, I assumed he was also seeking shelter but he was more sanguine about it, not expecting severe winds inside of Skye, and he left early next morning.

After a quick shopping expedition it was a quite evening with a nice sunset. 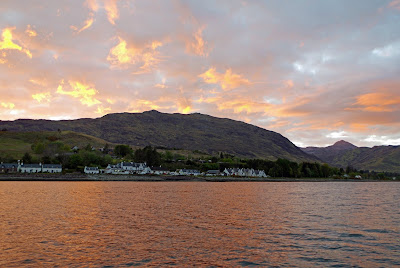 The forecast on Thursday morning was a bit worse than previous with gale force winds expected.
My remaining 32 metres of chain should be more than adequate in 5 - 7 metres of water but with increasing winds and a poor forecast I decided to give the anchor a helping hand, one alternate was to use some of the nylon rope already spliced to the chain that has the advantage of being elastic but I decided to back the anchor with additional weight, this will help keep the anchor end of the chain closer to the seabed for two advantages.
I used the weight intended for my Jordan Series drogue, a 3.2 Kg "Grapnel" folding anchor / grapple with 5 metres of 8mm chain plus some rope attached to one end. On the other end of the "Grapnel" is a large bow shackle running on the anchor chain. I let this down so the top end of the chain was under water and the grapnel just above the seabed when the boat was not pulling hard on the chain.
This worked very well, I have felt no snatch and the anchor has been rock steady with gusts up to 36 knots (F8) during the evening and judging from the sound and motion quite a bit more overnight.
At the time of writing (Friday afternoon) the wind is dropping but is still c 25 knots with rain, I should be able to move on tomorrow. The lunchtime forecast has introduced the possibility of a SE wind of F4 - 6 on Sunday so if I move it will need to be to another sheltered location and probably not down the Sound of Sleat.
A few miles down Loch Carron to the facilities at Plockton might be a good idea but I will delay a decision until I download the weather maps this evening or early tomorrow although the models are seriously under estimating the wind here, the domestic forecast and inshore forecast has proved more realistic.
Slide show of all my pictures at Upper Loch Carron, page through by clicking the arrows or click in the centre of the pic to view from Flickr in a new window or full screen: 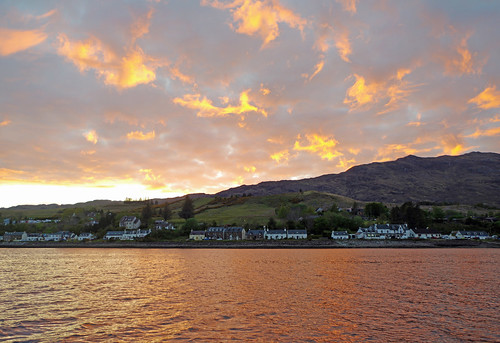 Click here for Day 38, Lochcarron to Plockton.
Posted by John Lashbrook at 2:54 PM