Another early start, again I woke early and found there was no wind, the ideal time to get the genoa housed and furled, of course in the few minutes it took to get dressed some wind came along but only a light breeze and the sail went up with no more difficulty than usual - its a pain to do single handed as for the first third or so it needs feeding into the slot on the foil whilst pulling on the halyard at the mast or cockpit which really needs two to do. 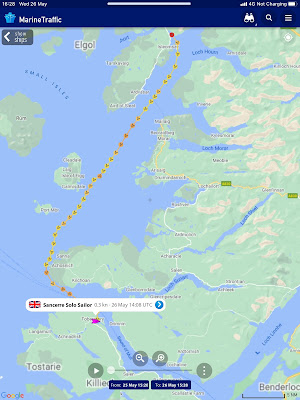 As I was up it was worth leaving immediately to get as much favourable tide as possible so I was underway at 06:00 and by 07:00 I was out of the loch and sailing with 10 knots of wind making 4.5 knots.

The wind was up and down a bit as I went down the Sound of Sleat, largely between 8 and 15 knots, initially on a broad reach then running.

As I approached Eig the sea and wind was making towing the dinghy a bit iffy, which did not bode well for rounding Ardnamurchen Point where it can be very lumpy, so whilst in the lee of Eig I pulled the dingy up onto the foredeck, not ideal for sail handling, anchoring etc. but less of a worry and there would be smooth water coming onto Tobermory when I would have to put it back in the water, as it happens the wind and sea dropped before I got there but better safe than sorry.

Clearing the Isle of Muck there was a bit of drama with a very broken transmission from another yacht (they had a fault, it turned out I could see the boat but had as much difficulty as the coast guard in understanding what was said) reporting a flooded, unmanned Kayak at sea.

After a great number of repeats the coastguard got the message and broadcast an all ships "pan pan" priority call alerting shipping and asking for any further information.

I realised from the Lat & Long (aren't chart plotters great?) I was only a few miles away and the incident was almost on route just north east of Ardnamurchen. The wind by then was light so on went the engine and I headed in to the site at 6 knots keeping a good look out and scanning the shore with binoculars.

I arrived on scene about the same time as the Tobermory Lifeboat which did a sweep up wind to check for people in the water before recovering the Kayak and heading back.

This is becoming a bit of a thing, last year I arrived as the Lifeboat was recovering a grounded yacht just outside of Tobermory harbour.

Safe sailing and welcome back to Sunny Mull.
42 miles over the ground in 10 hours.
Slide show of all my pictures from Loch Na Dal to Tobermory, page through by clicking the arrows or click in the centre of the pic to view from Flickr in a new window or full screen: 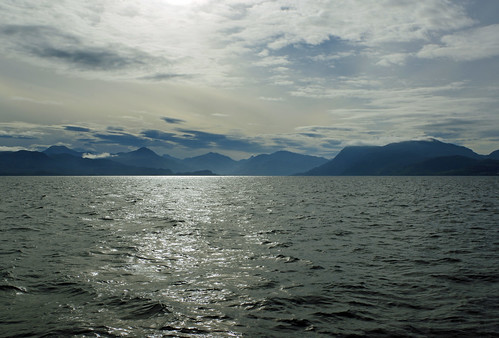 Posted by John Lashbrook at 2:10 PM