Last night I could not make up my mind if it would be worth leaving early today to head for Eigg or to wait until the afternoon and do a quick hop to Ornsay, the problems were the weather forecast at 19:00 showing probably acceptable winds but rain, the second the need to be at the north end of the Kyle Rhea at 07:00 or about 19:30, the tide runs at up to 8 knots so you need to go through just as the tide sets favourable.

In the end I did not bother setting the alarm and left it to chance, waking up at 04:00 I checked the midnight forecast which was OK and it was calm and dry outside so I was underway in not much more than half an hour, initially under engine but picking up a good northerly breeze half an hour later and I was off towards Sky Bridge at a good pace, making up most of the time from not starting a bit earlier.

Just after taking the above picture the trouble started when the headsail furling jammed. I thought I had fixed this after the incident off Dover by changing the lead angle but it looks like I went to far the other way, this time the sail had been let out completely under control. The riding was deeply buried so the sail had to come down in case there was a sudden squall, a likely possibility as the 06:00 forecast was significantly worse than that at midnight with winds forecast to be F4-6. 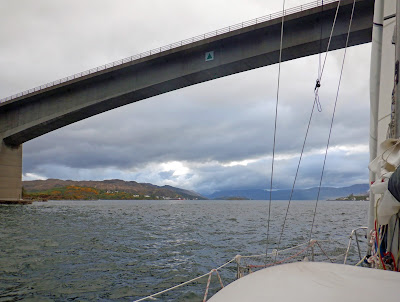 The passage through Kyle Rhea was uneventful but wet, despite being half way between spring and neap tides and only just after slack water there was still 4 - 5 knots of tide and occasionally 6.
The video (best viewed full screen if you have the bandwidth) was taken at the southern end of Kyle Rhea about an hour after the tide turned south and outside of the charted area for the worst of the over-falls, the water was still quite disturbed with the bow sometimes quickly swinging 30-40 degrees of course before the autopilot corrected.
Once I was in the Sound of Sleat the weather turned for the worse with winds of F5 & 6, one particularly strong gust coming off of the mountains flipped over the dinghy I was towing, fortunately the securing points for the bridle held until I could take way off and with some difficulty I righted it and shortened the tow line so the dinghy was snugged up under the transom and sheltered from the wind.
With the wind in the north the Ornsay anchorage looked a bit exposed and would likely become more uncomfortable if, as forecast, the wind veered to the NE, so I turned right into Lock Na Dal. Another yacht was in "position A" and the water ahead of her was a little shallow so I tried to anchor to the left of her.
In pouring rain that failed as the anchor skidded over weed and it took 3 more attempts to get it to hold by this time well behind the other yacht (which shortly sailed away!). During this kerfuffle the dinghy painter, which had fallen out when the dinghy was inverted, got wrapped around the skeg / rudder making the last attempt tricky. Fortunately I was able to clear it with the boat hook once I was anchored.
Now I have to wait for the wind to drop so I can get the genoa hoisted - a pain to do single handed - and I will hopefully be able to get away tomorrow, probably for Tobermory for fresh food, a shower and a session in the laundry room.
18 miles in 5.5 hours (with all the messing about trying to anchor).
Slide show of all my pictures from Plockton to Loch Na Dal, page through by clicking the arrows or click in the centre of the pic to view from Flickr in a new window or full screen: 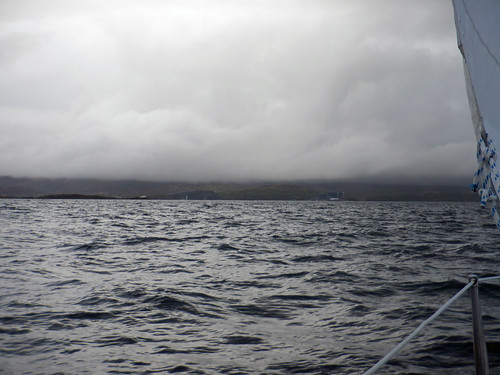 Posted by John Lashbrook at 3:29 PM