A few hours sleep and I was off at 01:30 for a long day, under engine until a light wind set in at five o’clock so that I could sail, initially close reaching until the wind started to swing and by 06:30 I had the cruising chute up, quickly to be replaced by the big symmetrical spinnaker at 07:00 as the wind settled down to a little east of north at 7 knots. I held the spinnaker for over 8 hours with a couple of gybes as the wind swung.
The inshore route through Ramsay and Jack Sounds was not on the cards due to uncertainty of the time of arrival and uncertainty about the wind strength and direction, so it was a longer route across St Brides Bay. The spinnaker came down as the wind increased and I prepared to round up pass the “Bishop and Clerks” and inside “The Smalls”, with strong currents and eddies this was no time to have a big spinnaker up single handed. 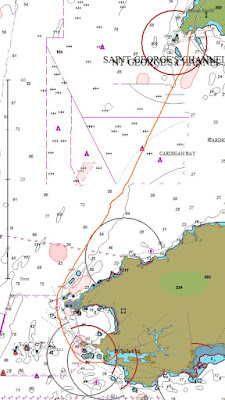 For extended periods I was making 10 knots over the ground motor sailing. But went back to sails only as I passed Skokholm Island. This was my third time through this channel and the first I actually saw it, the first occasion it was night and the second, earlier in this cruise, in thick fog and the speed of the current was far more obvious.

I headed into the Haven under engine in a very brisk head wind and was rather concerned that the swell and chop  I was going through would carry through to the planned anchorage in Sandy Haven Bay but all was well when I got there and anchored at seven thirty with half a dozen other boats planning to ride out the increasing wind under the shelter of the cliffs.

Click here for the sometimes rather fraught trip to Newlyn.