This opening is getting repetitive! But it was another early start, this time 04:00. Initially I had assumed a slightly later start to give fair tide down the side and round the end of the Mull of Kintyre before the tide changed at 11:00 but the forecast was for fairly strong northerly winds and I did not fancy the rough seas wind against tide would cause in the middle of the North Channel so I left earlier to hopefully get to the Irish coast before the tide turned and possibly hug the coast. 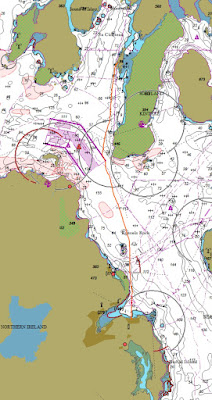 There was no wind, so I motored to the SE corner of the Traffic Separation Scheme off the Mull, there was then enough wind to sail but a merchant ship was heading north for the TSS (a bulk carrier going to Murmansk in ballast, a product of trade sanctions?) so I kept the engine on until across her bow then sailed at good speed south with the wind from the NE making good time.

It was uncomfortable with waves coming from all directions but not too bad until I reached “The Maidens (NE of Larne) with the tide running strongly north when the wind started to drop so I put the engine on to maintain good speed but it remained uncomfortable until well into Belfast Loch.

When I had a phone signal John on Pippin and I exchanged emails and texts, he had made good time coming north with the tide from Ardglass facing some nasty seas under engine and it was touch and go who would arrive first.

Half an hour out I called the marina for a berth and found John had called ahead but did not yet have a berth allocated and the helpful berth master put us together. I was in first and was on hand half an hour later to help Pippin onto the berth which was really a size too small for her.

I spent a couple of days there restocking for a long trip south, the next revictualling would probably be Newlyn, getting a couple of small jobs done and eating. John seems to have the knack of spotting good places to eat, we had excellent meals on both nights one at a Thai restaurant also doing European food and the other at a pub which was spotted after we found the Thai was closed on Monday so we could not get seconds.

John's account with lots of good pictures of Bangor marina can be found on his excellent blog here and here, or from the link on the panel to the right. Fortunately, it does not include the picture of me at dinner that was included in a summary of the blog published in Practical Boat Owner later in the year.

63 miles in a little under eleven hours.