I left at 0500 with a light and variable wind, fore and aft sails initially then flying the cruising chute from a mile short of the Skerries
Then the wind changed further and I was struggling to carry it past the skerries without gybing, which is easy enough but a bit of a pain with an asymmetrical sail already on the pole, I therefore took it down and ran past the Skerries under mainsail whilst I had lunch then put up the big symmetrical Spinnaker, for only the second time on this cruise.
This is the spinnaker working properly the next time I had it up: 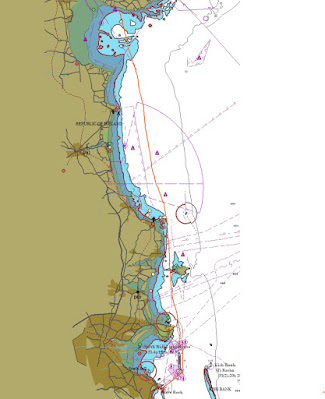 As I passed Lambay Island the wind hauled forward and increased so that I was on a nice spinnaker reach well under control but a few miles north of Lambay Island I had a feeling about the wind, it had headed a few more degrees and steadied but intuition told me it was going to come further forward and possibly strengthen which would make the 60 square metre sail a bit of a handful so I decided to change back to the cruising chute which would be ideal with the wind 10 or 20 degrees further forward.

Unfortunately, my intuition had partially failed as whilst I was still packing the spinnaker the wind swung quite a lot and the cruising chute had to come down before I had finished stowing the spinnaker gear.

As I past Ben of Howth I could see on AIS that a large ferry was coming down the channel from Dublin and likely to be rather close so I furled the headsail and started to motor sail which was just as well as I had to slow down and head up to keep clear taking me very close to the Traffic Separation Scheme.

There was 2 more ferries and a cargo ship also coming out so I motored across Dublin Bay. All three ferries were leaving for Holyhead one after the other, why they choose to leave almost together I have no idea as I don’t think there are any tidal restrictions at either end.

Too lazy to start sailing the last few miles I continued to motor, perhaps a mistake as I was hurting for fuel a few days later. As on a couple previous trips I anchored for the night at Sorrento Bay which I quite like as there is plenty of things going on to watch with a sun downer or two. This time however it became a bit uncomfortable in the early morning, the sea apparently dead calm actually had a very slight swell from the south east and the period matched Sancerre’s natural rolling period to she would start to roll quite badly at times. However, given another early start it was not a big issue.46 miles over the ground in 12 hours. 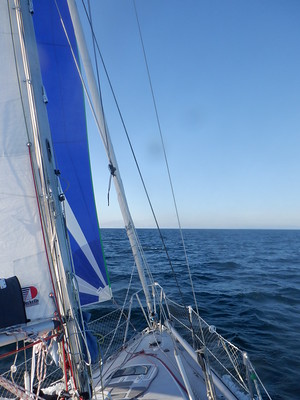 Heading east.
Posted by John Lashbrook at 9:26 AM