As is often the case passage making along the south coast, this was going to be a race to make tidal gates. Firstly I needed to go through Hurst Narrows on the flood tide and preferably carry the flood up the Solent, this was particularly important as it was a spring tide.

Then I had to arrive at my mooring when I would be able to get on to it single handed, on the Hamble this gets a little complicated because of tide coming up the western Solent and, somewhat later, more coming up Spithead and the eastern Solent.

If the wind is not strong off the beam I can usually get on the trot mooring single handed without much fuss when the tide is slack or not running strongly, in theory I could get on with the tide ebbing but this is not practical, firstly because for the majority of the time it is running very fast - notice that on this spring tide the ebb proper starts at about 15:40 and ends at 18:48, only three hours when all of the water that came up from 06:25 to 15:40 goes out. Secondly I need to be pointing down stream so that I can leave at any time during the flood or stand, it often not being safe to do so on the ebb because of the boats close up and down stream being in the way.

So, on the 16th the best times to get onto the mooring would be between approximately:

Any time between 06:30 and 15:30 would be straightforward two handed but can be challenging single handed, Sancerre is "only" c 3.5 tonnes but holding her against a strong tide can be difficult for this 70 year old with boats only a few yards ahead and astern. And if your timing is not spot on, it is quite likely you will have to hold her on the pick up line whilst reaching and securing the first mooring line. Then the stern has to be pulled onto the aft buoy against the tide which on my mooring is not aligned with the direction of the tides flow.

So the first order of business was to get into the Solent, if under sail getting in any time on the flood was acceptable and achievable with quite light winds, a 15:00 arrival would be most likely under sail with 18:50 or 22:00 as fall back and if I was lucky a space to wait on the RAFYC short stay pontoon.

Under engine an early start might mean using one of the earlier windows with the chance of getting home on the same day.

I set the alarm for 04:15 and was away by 04:45 with no wind and none was to come in that morning. I made Hurst castle just before 06:00 with the flood just getting into full swing.

I made a consistent 9 knots over the ground until well up the Solent and was on a mooring at 09:30 in the middle of the first window.The down side was that someone was on my mooring and I had to pick up the only spare operated by Hamble Ferry which, being directly behind a large motorboat with long forward mooring lines, left little room for me and that was to cause me some grief moving the boat next day as things got sorted out, a newbe had had problems getting onto his mooring and it turned out had cut one of my mooring lines and some of his.

But, I was on my way home, I secured the boat grabbed the main valuables and the trash and got the water taxi to shore, a bus to Southampton then the train and a taxi and was home by mid afternoon ready to go down with the car the next day to start clearing out the clutter. 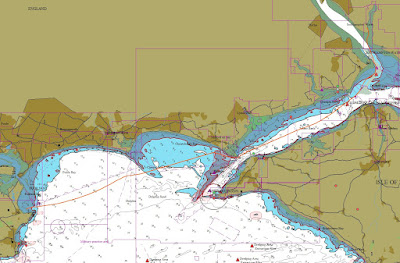 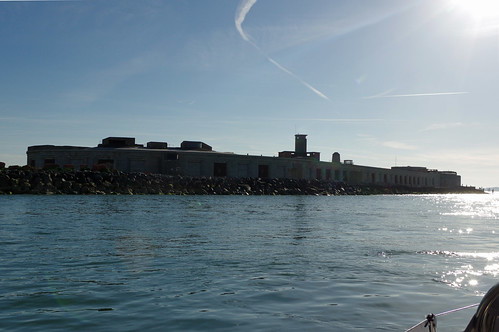 Click her for some stats and a summary of mechanical issues.

Posted by John Lashbrook at 3:43 PM