I left Beer with no clear idea as to where I would end up or which route I would take, it would all depend on the weather and the tidal gate around Portland. The inshore (inside) route around the Bill would open after five in the afternoon so would clearly be practical but would probably mean anchoring up somewhere, probably West Bay, to wait for the tide. On the other hand the tide would turn westward on the offshore (outside) route at around twelve by which time I really needed to be past the East Shambles, especially as it was only a day off of the spring tide. That would require an early start and almost certainly given the weather forecast extensive use of the engine.

If I went the inside route I would go into Portland Harbour to anchor, if the outside route my target was Chapman's Pool just before St Alban's Head with Lulworth Cove and Worbarrow Bay possibilities. But if the Lulworth range was active and as I did not want to exercise "my right" to ignore the range and barge straight through disrupting operations (not a few do), Worbarrow would only be accessible with the range closed and Chapman's Pool awkward to get to, although that was likely to be less of an issue as the range tends to close around 17:00 and if there is night firing it reopens at dusk which would be late.

The plan was therefore not to set the alarm and to set off when I woke up and see how things went. As usual at this time of year on the boat I woke early and was off at 05:30 with 12 knots of wind from the north, quickly freshening to 15 knots, with the tide turning favourable I was making good progress but it could be tight for the outside route and I would be very early for the inside route.

This resolved itself when the wind died to almost nothing, did not look like returning and was not predicted to do so on the 07:00 inshore waters forecast. I stuck at it for a couple of hours but if I was going to use the engine I might as well do so in time to make the tide past the Shambles, so when I calculated that it was the latest moment to get through at a sensible cruising speed on went the engine.

It is recommended in the Pilot, Reed's etc. that you should either pass within c300 yards of the Bill (during a narrow time window and hugging Portland for at least 2 miles on the east side and on the west side when going eastward) or between three and five miles and much further out is usually preferred in bad weather. The Shell pilot (Ed Tom Cunliffe) describes the Portland race as the most dangerous open stretch of water in the Channel, worse even than the race of Alderney and those along the French coast, so it deserves respect!
A day off of springs in very benign conditions I opted for 3 miles although a motor boat went round inside me, I was hoping that I would get a good push north as the tide turned but I was perhaps half an hour to late for that to be a major factor.
I now had to decide what to do next. The range was active, the tide foul and the sun hot so I decided to park up for a while and move further east to Chapman's Pool when the tide turned at around six. It would also give me a chance of diving to see if the propeller was fouled, since Cawsand I had noticed a lack of oomph at low speed and a bit of vibration. I decided on Durdle Door as on a hot day I suspected Lulworth Cove would be chock full of boats.
A cooling swim was now in prospect, but I did not need that much cooling so on went the emergency wetsuit, fins etc. but in such calm weather for a quick inspection I did not bother with the crash helmet (three and a half tons or more of boat coming down on your head when there are waves is not recommended),The water seemed much colder than on my 05:30 dive off of St Ives, it was refreshing but I did not stay in any longer than necessary!
I had gone to the east beach for peace and quite but an hour later there were three inconsiderate people playing loud music, one very loud from a newly arrived powerboat. I noticed on AIS that a range guard boat was heading back to Portland so I gave him a call to see if the range had closed, it had, so I left earlier than planned against the tide but well timed because when I reached St Alban's Head where the tide gets strong, it had changed and I decided to press on and go to Studland for the night, that would put me in range of the Hamble on Thursday so I could get home to fetch the car on Thursday or Friday and not have to risk public transport at the weekend.
As I rounded Anvil Point a breeze came up from the southwest so I put the cruising chute up (it had been sitting on deck for most of the day after a brief use earlier) and sailed quickly on to Studland where I picked up the last available free "Eco mooring" recently installed (by Boat Folk marinas) to help protect the sea grass beds and the Seahorses that live in it.
Studland is very attractive but I would like it a lot more if people stopped driving noisy powerboats through the anchorage at high speed, their wake threatening to spill my sun downers. 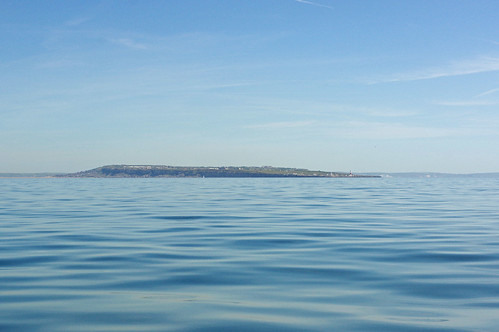 60 miles in twelve and a quarter hours.

Posted by John Lashbrook at 3:40 PM