After a day fuelling the boat, getting washing done and restocking fresh food, I spent a day visiting Ron, a sailing friend, and helping with some heavy work on his boat that injury and illness was a bit beyond him. I had intended to leave the next day but although the forecast wind was reasonable the maps looked as if that might change, also it was due to be raining most of the afternoon and seas could be rather rough, so I delayed a day and started getting the blog up to date - I had little time since leaving Tobermory.It was the right decision as F6 winds returned to the forecast at midnight and it was indeed damp and cool in the afternoon. On Friday I left in a F3 under all plain sail with calm seas in the shelter of the land, and a decent amount of sun.

The wind and sea increased to a solid F4 / F5 and I had a reef in the main and variable amounts in for the headsail. Approaching the Lizard there was a big Atlantic swell and 4 metre waves - which never looks as high in photographs - but reaching it was not a problem, although somewhat lively.

I reached the Lizard a little early with wind still against tide so I stayed well out and then made good speed up the Lizard peninsular with a following tide.
The sea calmed as I moved north but it was less comfortable at times because until I reached The Manacles and was able to head up, I was on a dead run.

I anchored in St Mawes at 14:40. The wind was now over 20 knots having increased to F6 as I passed downwind of the Helford estuary and it was rather uncomfortable. On Ron's recommendation I moved up the Fal to an anchorage just south of Mylor marina and Penarrow point.

This was a lot more comfortable although in the morning with less wind, the boat was broadside to some slight waves and as I had experienced in Sorrento Bay, Dublin the previous week she developed an uncomfortable roll, but I had a decent nights sleep and was ready to press on. 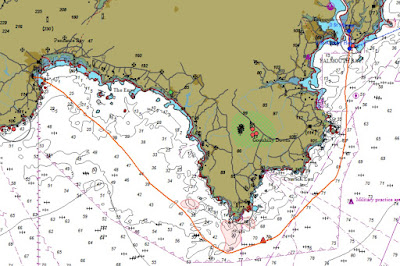 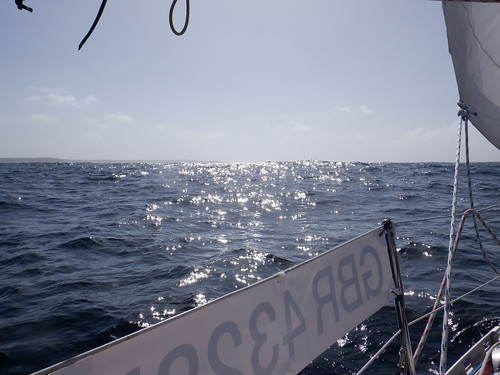 36 miles to St Mawes in eight hours then another hour changing anchorages, all under sail from clearing Newlyn harbour until passing St Anthony Head.

Posted by John Lashbrook at 9:58 AM