After a couple of planned nights at Tobermory to restock and get some washing done, I had another couple of nights waiting for some decent weather. A familiar story but at least it was only 2 nights, and I was only “stranded” on the boat for one day due to high winds, having stowed the outboard for the winds the previous night I could not be bothered to put it back on the dinghy and it was too windy to row.
Rain in Tobermory, when the wind came up further the
crew of the boat behind had to turn out to put on the
second mooring line they should have already had,
especially as the single was just threaded through a
chain link without a round turn to reduce chafe.
Then on Saturday I was off.

A normal early start, this one at 03:40, the driver this time was the trip down the Sound of Mull and the chance of getting through the Sound of Islay on the first day, so I left just before the tide changed favourable outside of Tobermory. The trip down under engine was uneventful with little wind.

After dodging the ferry at the southern end I headed off westward under sail as the wind set in and apart from a short burst of engine when under the shadow of cliffs near Loch Spelve I sailed in light to moderate winds all the way to Islay initially hugging the coast of Mull to avoid “The Great Race” rushing out of the infamous Corryvreckan.I was a little early for the tide down the Sound of Islay and to slow down I dropped the mainsail and put a reef in the headsail, running before a brisk F4 this was also a good plan for sailing down the Sound as the wind gets gusty and variable in direction, so headsail only avoids a lot of potential problems with accidental gybes.

Yet again I met the ferry from the mainland and maintained my 100% record on this from four transits.

As I emerged from the southern end there was some bad news, the latest weather forecast predicted overnight winds possibly reaching F6 from the E or NE which could make both anchorages close by on the south side of Islay untenable or at least uncomfortable.

Port Ellen was the obvious alternate but I headed off for some small anchorages near the south tip of Ghia instead (the ones that I had planned to use heading north), they were a little closer and in the northerly wind forecast for next day would give me a reach to the Mull of Kintyre rather than a slower run and a better chance of getting to Bangor in time to meet up with fellow Jester sailor John battling north to deliver his newly sold boat “Pippin” to the Clyde, like me he had been having weather problems, fortunately I was not stuck in the marina at Holyhead, wind damaged some years ago and with minimal facilities.

It was a quick trip across to Gigha and I arrived and anchored for the first time at 20:12. I dragged back until Sancerre came to a very sudden stop as the anchor hit a rock. After putting the boat full astern to see if the anchor held I stayed for a while to see what would happen when the boat swung and after a while the anchor skipped over the rock and another burst of reverse engine had me dragging at a rate of knots.When I got the anchor up there was Kelp on it, trailing back over half the length of the boat, so after hacking the weed off with the boat hook I motored a few hundred yards to the next small anchorage where I spend a comfortable but short night.

78 miles in sixteen and a half hours, excluding the change of anchorage. 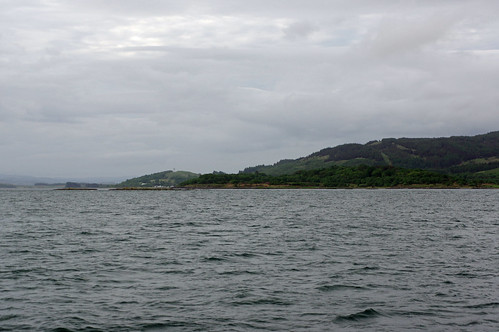