This was always going to be tricky with the tidal gate around Land's End, last year I got well ahead of myself after making 5 knots largely under sail and then got smacked about off Land's End with a freshening wind against tide. This year even with an early start I would have to make 4 - 4.5 knots to get past before the tide turned adverse.

An added complications was lack of fuel; I had not refuelled since Tobermory and had used a lot going down the Mull of Kintyre and crossing the Irish sea.

My rule around UK, which I have never broken, is to always have sufficient diesel to reach a place of safety, and there are not many of those around the Celtic Sea / Bristol Channel, the St Ives anchorage is only tenable in good weather and the harbour is tidal so the options are to return to Milford, go to the Scillies, continue to Newlyn or head for Padstow - not the easiest place to get into in some conditions and tidal.

I had planned to refuel at the nearby marina but at the last moment I found they do not provide fuel during free flow through the lock, due mid evening on Saturday, that would mean locking through and possibly staying overnight and strong winds were forecast so I gave up on that idea.

With about 30 litres (this is the first season with a fuel gauge so I remain sceptical of readings although they do appear to be accurate), probably 20 - 25 usable depending on the sea state, and a bit more in the heater tank and can, the actual amount available, etc, I had a range of 85 miles under power with a small reserve. In practical terms that meant after clearing Milford I should not use the engine until halfway to Cape Cornwall.

I weighed anchor at 03:10, the wind was as forecast, ENE F4-5 and the sea state reasonable and I was off to a flying start running under headsail alone. Then, when about 10 miles offshore the wind picked up to F6 and the sea turned nasty as it had when I was going the other way through this piece of water back in April.

With a quartering sea I could go very fast surfing the waves, but it would be precarious with a serious risk of a broach, I could probably avoid that by hand steering but only for a limited time, under autohelm or the wind vane it was not safe so I reduced sail and continued at around 4 knots through much of the morning taking shelter below during rain squalls when the wind occasionally gusted to F7.

With the strong wind the SeaFeather wind vane steering again performed better than the high-tech autopilot which, trying to predict unpredictable waves, worked hard but achieving little and was using a lot of amps that were not being replaced due to the failure of the wind generator and lack of sun for the solar panels. The SeaFeather just steered to the wind and Sancerre took care of the waves.

Some light relief was provided by a large pod of Dolphins that unusually stayed with me for about 2 hours rather then the more usual 30 - 45 minutes. They seemed to be spread over several square miles and taking it in turns to play around the boat frequently jumping out of the face of often breaking waves. Another solo sailor has experienced the same a bit further south a few weeks earlier.

The wind started to moderate mid morning and then became variable and by lunch time Southerly F3 then an hour later SW F2. With the limited "fetch" the sea quickly calmed down. At 3 o'clock with light and variable winds forecast it was clear that I would not make that evenings tide around Land's End so I decided to head for St Ives, anchor there for a few hours sleep then leave for Land's End at about 07:00.

Winds remains light and variable so to ensure some sleep and having fuel to reach Newlyn with a reasonable reserve I put the engine on hoping to arrive Newlyn at about 13:30 next day. By now it was a pleasantly warm evening with a bright moon. Just no wind.

At 01:08 the moon set and about 15 minutes later in pitch black, I was looking ahead to identify the anchorage when, at the edge of the pool of light from my steaming light, a lobster pot buoy (at the time I did not know for certain it marked Pots, it could have been marking a net or dead / night lines which complicated later decision making) appeared a couple of boat lengths ahead on the port bow and a Dan buoy on the starboard. There was no way to change course quickly enough to avoid them so I lunged for the power / gear leaver to at least mitigate the likely tangle of rope around the propeller and shaft. I  quickly came to a halt, anchored by the propeller or skeg to the pots or whatever, in 20 metres of water. A quick check hanging over the side with a torch and pulling on the Dan buoy showed the propeller was involved.

Fortunately the sea was smooth and the wind very light so, after alerting and consulting with the coastguard who would keep watch on my position from my AIS transmission to back up my anchor drift alarm, I decided to get some sleep and get help in the morning, it not being safe to go over the side in the dark and with the probability of the boat drifting off down wind if I cut the rope leaving me trailing on a safety rope.

Forty minutes later the anchor alarm went off and I was drifting quickly west with the tide and now in 28 metres of water, either the line had parted or the pots were dragging with some possibly suspended below the boat. Putting the anchor down was risky as, if the pots (or nets) were still attached, it could land on one or more of them or tangle with the line, further complicating things, also with a rode of 40 metres of chain and 40 of nylon it was by no means certain the anchor would hold, although I could drudge (the anchor slowing progress but not holding, a technique sometimes used to slow down in Fog but making progress).

With essentially no wind I could not sail either - not good!

I informed the coastguard and they called the lifeboat which arrived in double quick time, very impressive given they had to launch a "D class" from the dried-out harbour to ferry the crew out to the all weather boat. Standing someway off they were able to see that the line to the pots had parted and they were able to tow me close to the harbour where I anchored.

Crew working with the boat hook from the D class were unable to free the lines so the coxswain said he would come back out at high tide (I assume in the D class) to tow me into harbour to dry out against the wall to remove the rope at the next low tide. I agreed but said when the light improved I would dive on the boat to see if I could free it. Not wanting to keep them hanging about I said I did not need them to stay, I would be properly equipped and within easy swimming distance (at least in a wet suit) of the harbour but agreed to contact the coastguard after diving to let them know I was OK.

At 05:00 I donned the wetsuit, fins & mask I have on board for the purpose, plus a water-sports crash helmet to protect me from banging my head on the hull and went for a swim with the boat hook and emergency knife.

Once in the water I could see what needed to be done, although the buoy was hard under the boat trapped between the hull, propeller and shaft, the line was only loosely round the propeller but you had to pull the loops off in sequence, 3 short dives and I had the line free and pulled the simple buoy to the same side of the boat as the Dan buoy then swum them to nearby mooring so that the rig would not get lost, it was undamaged apart from the main line being missing, the connector or a knot had probably failed as there was no loose end of rope. I had got to the gear lever just in time and the shaft "freewheeling" had only turned a couple of times before being stopped by the rope.

At 05:30 I called the nice lady at Falmouth Coastguard by phone (after the initial call much of our comms were on the phone keeping the airwaves clear) to let her know I was OK and free of the fishing gear and got a heads up on the weather forecast not yet on the web which was good for the morning but with F6 coming in overnight, so I decided to move on so as to be in Newlyn before it arrived.

I was off at 06:40 and with no wind motored round Land's End, I was somewhat early for the best tide but calm seas allowed me to cut some corners although, being tired, I did not do the same as another boat that took the short cut inside the Longships. I did get some sailing in from the Runnel Stone towards Newlyn arriving at 13:30, dead on the time predicted the previous afternoon, to find a vacant berth and a shower. 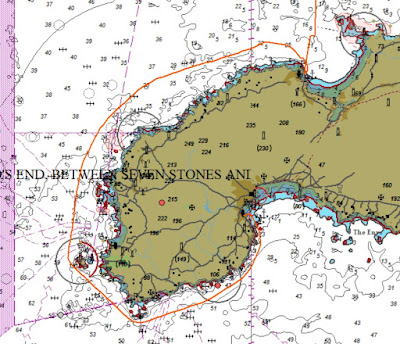 131 miles in thirty four and a half hours. 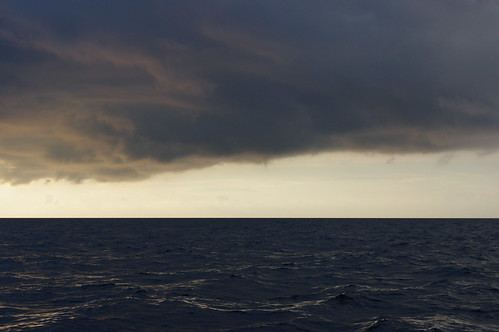 Newlyn to St Mawes and on to a better anchorage.

Posted by John Lashbrook at 9:51 AM