A very pleasant sail with sun most of the way but not hot with the wind. I was under sail soon after weighing anchor, but expecting a dead run or very broad reach I did not bother with the mainsail which would just get in the way. And with the promised force 4 -5 winds it was unlikely that I would want to put a spinnaker up. 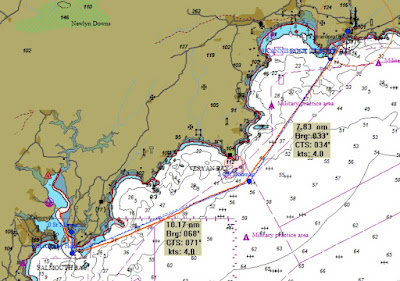 I arrived at Fowey at 2 o'clock in time to see the the Saturday racing. 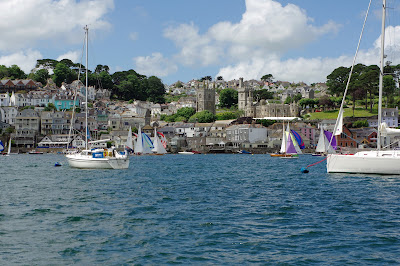 Below: A rather ragged start for the Fowey "Troy" 18ft one design keel boats:
With their big mainsails these look to be a bit of a handful in the usually gusty winds in the Fowey estuary. Designed in 1929 there are 26 know to exist many of which are raced. The small wooden dinghy with the red and yellow sail is a Fowey River class clinker built 15ft foot dinghy.
The moorings were quite busy with only a few empty by early evening, the town was also fairly busy but not the heaving mass you get during the school holidays and I was able to get a good, albeit expensive, dinner at the King of Prussia. By Sunday afternoon there were few boats left on the visitors buoys, some of which were on a rally from Mylor and presumably had to get home.
My planned meet up in Plymouth with a fellow solo sailor planned for Monday / Tuesday is now off so tomorrow (Monday) I will probably head for Cawsand Bay (Plymouth) or Hallsand (behind start Point) if the wind permits - the models differ. Winds are likely to be light for several days with little or no rain so after that I'll probably go round Lyme Bay in 2 or 3 days then take the inshore route around Portland Bill, the gate for which will be open late afternoon / early evening, anchor in the harbour for a night and I should be back in the Hamble after two more days or possibly three if the easterly wind promised for Thursday materialises. 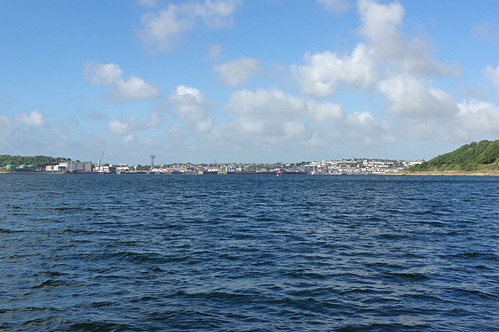 25 miles in five hours 45 minutes for an average speed of 4.4 knots over the ground, not bad under headsail alone with an adverse tide until Dodman and less than a mile and a half under engine and that generally below the average speed.